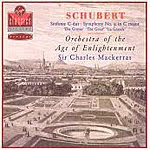 Who says period-instruments bands have to play at frantic speeds or sound edgy and hard? The way the Orchestra of the Age of Enlightenment play and the way Virgin record them, they sound positively mellow.

This 1987 recording has been around now for quite some time, but I was reminded of it after listening again to Josef Krips's classic Decca recording from almost thirty years earlier. The Krips reading of the Schubert Ninth uses a full modern orchestra, while Sir Charles Mackerras uses a slightly smaller period-instruments group, so the two performances aren't really comparable. They're more complementary.

Moreover, Mackerras not only uses a smaller body of performers (though still substantial at about sixty performers) playing on authentic period instruments, he also observes all the repeats and mainly follows the autograph manuscript score. As Mackerras notes in the disc's accompanying booklet, Schubert marks the tempo in the very opening of the work differently than most conductors play it, so with Mackerras the Andante introduction flows more easily into the following Allegro. Mackerras follows this up by observing that Schubert wanted most of the movements paced a bit slower than we usually hear them, resulting in a greater continuity throughout the entire piece than we normally hear. It's true that under Mackerras there is also a certain degree of sameness about the symphony; yet, if anything, it serves to bring out the work's lyrical qualities more than ever, and it helps to dispel the notion that Schubert was making something of a mishmash with the symphony.

In this latter regard, it's also of interest that for years during and after Beethoven's lifetime, hardly anybody produced a major symphony; composers must have figured Beethoven had already done it better than anybody else, so why bother. (It would be a few years, even some decades, before Mendelssohn's and Schumann's symphonies appeared.) Schubert finished his Ninth in 1827, a year or two before his premature death in his early thirties, and he never heard it performed publicly. He wrote his earlier works mostly when he was in his teens, and people didn't take them too seriously. Then he left his Eighth unfinished. So, while we take Schubert's symphonies for granted today as major parts of the basic repertoire, almost nobody, including the composer, heard most of them in the composer's lifetime.

Anyway, remember that word "mellow" I mentioned earlier? It really does describe the sound of this recording pretty well.  Yes, the violins produce their customary "period" sounds, and, no, they don't sound as smooth as modern violins would. But they don't grate on the ears the way some period instruments do, either. We also get a fine stereo spread and a reasonable sense of depth to the orchestra.  All around, it's an enjoyable listening experience.

Now, is Mackerras at the top of the recommended list of Ninths? Well, it's close. While it doesn't convey the airy cheerfulness of Krips (Decca), the Olympic grandeur or Szell (Sony), or the magisterial authority of Klemperer (EMI) or Wand (EMI), it does have authenticity on its side, something closer to what the composer had in mind than the others, and it's definitely among the more radiant performances around.

(Incidentally, the cover art pictured is for the edition I own, which may no longer be available. I've noticed different cover art on the newer rerelease.)