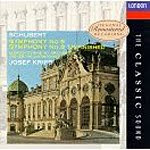 The Schubert Ninth Symphony has always been a favorite piece of music, but I had quite forgotten how very good Josef Krips's 1958 LSO recording of it is.  I owned the performance on LP for years, but when I listened to it on CD the year Decca first issued the disc (at a friend's house), I found it sounded too bright and edgy for my taste.  I never actually owned the disc on CD myself, though, until I got this 2004 Decca remastering.  The CD is still a tad bright and edgy, with a touch of noticeable but unobtrusive background noise, but the sound is better than I remembered it.

The interpretation reminded me once again how very good Krips was in this music.  Everything about his performance of the Ninth is as perfect as one could want.  No reservations about the music's length being too extreme, because if anything the work flies by all too fast, it's so enjoyable.  No reservations about the tempos being too weighty, too slow, or too fast for that matter, because Krips takes every movement at an ideal speed, never sluggish, never frenetic.  And no reservations about what Schubert was up to in the piece, because Krips makes it clear that his Schubert is light, lyrical, and joyous, with no moody, philosophical arguments in sight.  It is a splendid performance in every way.

Krips's later, 1969 recording of the Schubert Eighth Symphony, the "Unfinished," with the Vienna Philharmonic, which Decca include on the disc, is also quite good, but it is not quite in the same league as his Ninth, lacking in the feeling of sheer, exuberant delight he brought earlier.  In terms of sound, however, the later recording is definitely smoother and more refined.  Still, the clarity and transparency of the earlier Ninth recording make it more than acceptable, and, frankly, in neither recording is the sonic quality absolutely state-of-the-art.  Nevertheless, it's good enough, making it pretty hard to complain about a coupling like this.