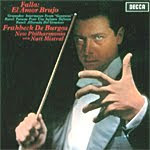 There is no doubt this classic 1966 Decca rendition of Falla's perennial favorite ballet-with-song El Amor Brujo has weathered the test of time quite well. Dutoit's equally beguiling rendition challenged it more recently, but de Burgos's way with Falla is certainly affectionate in the way he lavishes loving care and attention on every phrase. Nor does de Burgos forget the color and excitement of Spain, and audiophiles can be justifiably proud of showing it off to wow friends with their audio systems.

The bigger question is whether it's worth spending about twice as much money on this remastering of the piece when it comes only in the configuration cited above, and Decca's own various mid-priced editions come with more material. Does the new LIM (Lasting Impression Music) remastering really sound that good? LIM's owner and producer, Winston Ma, would assure you it is that good. As he points out, the new K2HD processing is better even than XRCD2. Well, that is his opinion, and what else would you expect him to say? But the proof is in the pudding, and there is no doubt this thing does sound good.

The K2HD remastering brings out all of the recording's dynamics and detail, providing a wide stereo spread and a fine sense of orchestral depth, perhaps a hair more so than on my old Decca "Classic Sound" CD. More important, the K2HD processing appears to offer up a smoother overall sound, which is most pleasing on the ear. However, some listeners may argue that it takes away some of the original CD's transparency by sounding slightly softer. I don't know. I leave that discussion to dedicated audiophiles. I only know I liked what I heard, the K2HD business making a good thing better. Twice as good? Not quite. But different in a pleasing way and different enough to make it worthwhile to discerning, deep-pocketed buyers.