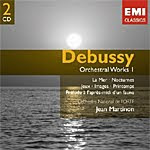 I mean, who else would want to hear playing Debussy? Jean Martinon was always the best in the business in French repertoire, and with a French orchestra on EMI, these 1973-74 recordings are about as good as it gets.

What's more, the older we become, the more things become a bargain. The two volumes EMI have issued include two discs each, cover almost all of Debussy's orchestral output (several of them piano pieces orchestrated by others), together contain almost five hours of music, and come at a very low price. As I say, a bargain.

Things begin with the more familiar material, La Mer, Three Nocturnes, and Prelude a l'apres-midi d'un faune on disc one, along with Berceuse heroique and Musiques pour Le Roi Lear. While La Mer is undoubtedly good, it is the Nocturnes and Prelude that overshadow the others. Martinon's light, airy touch and splendidly sweet, atmospheric manner are perfect for these works. Then, disc two carries on the show with a lovely Jeux, a colorful Images, and an enjoyable Printemps.

On Volume II, the first disc contains suites, Children's Corner, Petite Suite, and Dances sacree et profane, along with La Boite a joujoux. Of these pieces, the Petite Suite could not be better, a gorgeous little light-as-air wisp of a work. The final CD contains lesser-known compositions, several of them highlighting individual instruments. The Fantasia for Piano and Orchestra is actually a small concerto, and although it was an early piece and Debussy didn't care for it, it comes off as a charming reminder of things to come. The standout, though, is the Premiere rapsodie for orchestra with principal clarinet, which I had never heard before and found absolutely delightful. Rounding the final disc are the Rapsodie for Orchestra with saxophone solo, Le plus que lente, Khamma, and Danse.

EMI's sound from French sources in the 1970s always struck me as a bit bright, forward, and thin. They seemed to lack the deep bass and warm midrange of their English cousins. So it is with these recordings, remastered by EMI France in 1998. However, although I don't think they are in the same top echelon as EMI's English recordings of the time, they do sound good, and they have an especially nice sense of depth in the orchestral field.