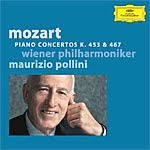 The relentless procession of live recordings from major record companies marches on. Ostensibly, the companies will tell you they do it to capture the spirit of the moment, the excitement of the live event.  That's true, of course, but it's also a pretty good deal for them. Studio time can be expensive, especially when it involves a large symphony orchestra. So the company get an audience willing to pay high prices to listen to a concert, they tape the concert, and then they sell CDs of the concert for more high prices. The audience essentially underwrites the recording, and the recording companies can't lose.

Unfortunately, the buyers of the CDs lose a little something because they almost never get a recording that sounds as good as what might have been produced in a studio or in an empty hall. Here, we have the great pianist Maurizio Pollini playing two great Mozart concertos and conducting the great Vienna Philharmonic from the keyboard. It's a terrific combination except for the sound and the audience. DG engineers edited the performances from various concerts Pollini performed during May of 2005, and the background noise varies according to how quiet any given audience was at the time. So, we might hear a constant shuffling of feet during one movement or a wheezing during another or the turning of pages in another or what sounds like Pollini himself grunting or humming along with the music in several others. Then, at the very end, to ensure that we know it's a real live performance, we get an eruption of applause that pretty much destroys the mood of both works.

I'd say this is doubly unfortunate in the case of Pollini because he is one of the world's greatest living pianists, among the handful of best. And his Mozart is nothing short of brilliant, his playing the most fluid, the most graceful, the most effortless imaginable. I loved every musical moment of both concertos; I just didn't care for the nonmusical distractions. Well, at least DG had the good sense to record these things as close up as possible to minimize the audience noise, even if it tends to lessen the reality of the experience. Still, even the close-up miking didn't entirely help.

One other nonmusical distraction: Why must so many disc covers and booklet inserts constantly refer to musical compositions only by their catalogue numbers, these being K. 453 and K. 467, for instance? Do they expect all buyers and listeners to recognize concertos and symphonies by these catalogue numbers instead of their more-conventional chronological numbers? For those of you not familiar with the titles K. 453 and K. 467, they are also known as Concertos Nos. 17 and 21.  Ah, No. 21, you say?  Yes, that's the one with the familiar "Elvira Madigan" theme in the middle, isn't it?  You wouldn't know it by the way this disc is packaged.