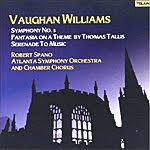 One can hardly argue against the merits of Ralph Vaughan Williams's Fifth Symphony. It is among the best things he ever wrote, and given that the composer himself is one of the towering figures not only of British music of the twentieth century but music in general, that's saying a lot.  This new recording of the Symphony and its several attendant works does it justice.

Robert Spano and the Atlanta Symphony Orchestra have never been in better form. Not that any interpretation could probably do harm to Vaughan Williams's score; it's so serene, so calming, so soothing that a conductor would have to have the disposition of a demented lunatic to mishandle its pastoral effects. Still, take nothing away from Spanos; he is a most sympathetic supporter of this music, which, incidentally was written during the Second World War to provide some spiritual relief for a war-torn world. Also, it followed the composer's angry, tempestuous Fourth Symphony, written in the mid 1930s in protest of the then-coming War, and the contrasts between the two works couldn't be more dramatic.

If you have never heard the Fifth, let me just say that even the Scherzo is so laid back, it melds into the graceful, lulling vapors of the rest of the Symphony. And I have to admit that by the time I reached the third movement Romanza, I had actually fallen asleep. This is not meant as an affront to the Symphony or the performance, just to illustrate the fact that the music is a surefire balm for the cares of the day. I awakened several minutes into the Finale, realized what had happened, and backed up to the beginning of the third movement again.  I enjoyed every minute of the disc, even the nap.

Telarc's sound also does the work justice, the sonics being smooth and fluent throughout, with an excellent sense of depth and stereo spread left to right. As Vaughan Williams specified no bass drum, we have no patented Telarc low-end to palpitate the senses, and it's better that way. There is nothing to distract the listener from the pure pleasure of the music and the music-making.