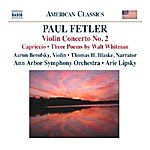 Who's Paul Fetler? I hear some of you asking. It's hard to keep up with all the modern composers who dot the musical landscape these days, even though Mr. Fetler (b. 1920) has been around for quite a long time and gained a sizable following. He's one of those contemporary composers who isn't afraid to reach out and touch an audience rather than bludgeon them with heavy-handed, often experimental noise. As such, his music is easily accessible and highly enjoyable.

Fetler, a Professor Emeritus at the University of Minnesota teaching music composition describes his compositional approach as "progressive lyricism" or expressively flowing melodies. Certainly, the three works on this 2009 Naxos disc reflect his lyrical style.

The program begins with Three Poems by Walt Whitman (written to commemorate the U.S. Bicentennial in 1976), musical settings for some of the great American poet's words, with a narration by lifelong Whitman scholar and Ann Arbor attorney, Thomas H. Blaske. The three selected pieces represent the tranquil as well as the outgoing sides of the poet, from "I am he who walks with the tender and growing night" to "Beat! Beat! Drums!" to "Ah, from a little child." If you like Whitman, Fetler does his lines justice.

Next is the single-movement but infinitely varied Capriccio (commissioned as a dedicatory work for the opening concert of the Minneapolis Chamber Symphony in 1985), a wonderfully light, playfully upbeat little set of ditties that make an appropriate contrast to the more-serious tempers of Whitman.

Things conclude with the showpiece of the album, the Violin Concerto No. 2 (1980), which the composer characterizes as a "labor of love," meaning it was not a commission and he was under no deadline to complete it.  The opening movement has a vaguely dark, foreboding, Eastern-European cast to it, which quickly opens up to a sunnier, more-inviting mood. It is poetically graceful, reminiscent of the more-placid elements of Enesco. Aaron Berofsky's violin passages dart nimbly amongst a whole bevy of attractive tunes, becoming quite dramatic by the close. In the second movement Adagio the tone turns more to Debussy in its atmospheric reverie. Then, the final movement takes the work out with a bang, Berofsky keeping his violin in constant motion.

The performers seem to be enjoying themselves immensely, and it's all quite agreeable, as is Naxos's sound. It's the kind of sound that my late dear friend Nate Garfinkle might surely have characterized as "sweet." It's not exactly a state-of-the-art audiophile recording, but it does come across as pleasantly realistic, with a natural sense of orchestral depth and presence. While the deepest bass, the widest dynamics, and the strongest transient impact may be slightly wanting, the overall sonic impression is velvety smooth and pleasing.

Email ThisBlogThis!Share to TwitterShare to FacebookShare to Pinterest
Labels: Fetler