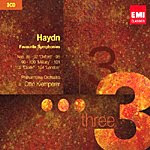 When you think of Haydn interpreters, conductor Otto Klemperer may not be the first name that springs to mind. One tends to think of Klemperer in terms of grand, large-scale productions, recordings of Beethoven, Brahms, Bruckner, Mahler, Wagner, that kind of thing. Yet he had a felicitous touch with lighter material as well, as his discs of Haydn, Mendelssohn, Mozart, Schubert, and Schumann demonstrate. If you haven't heard his Haydn, you're in for a treat.

What's more, if you missed this three-disc set of late Haydn symphonies the first time EMI issued it on CD in the early 1990s, here is your second chance to buy it in a 2008 repackaging. This is big-scale Haydn, generally slow and steady and deliberate, emphasizing the music's architecture rather than displaying the overt jauntiness of, say, a Beecham or the energetic ardor of a period-instruments group. In most cases, Klemperer's Haydn is like listening to the composer with new ears.

Outstanding among the eight symphonies presented in the set are Nos. 88, 101, 102, and 104, with Symphony No. 101 "The Clock" a good example of the best of the Klemperer style. It is an enchantingly beautiful performance, the argument strong and the rhythms feather light. This "Clock" is no modern digital affair, moving without heart or soul, nor is it an old grandfather snoozing laboriously in a corner. This "Clock" is graceful and ornate, all filigree and glass, inviting us to relax and take our time. Likewise do the three other symphonies I mentioned combine refinement and reason in perfect eighteenth-century order. Regarding the symphonies I enjoyed less well, they are perhaps overmuch of a good thing, the conductor trying too hard to make every piece sound like a precursor to Beethoven. But when Klemperer is off, it isn't for lack of trying. I enjoyed these performances immensely, and even his Symphony No. 100 "Military" comes off with unexpected élan.

These interpretations are for people seeking perhaps something a little out of the ordinary, yet the interpretations remain rooted firmly in the classical tradition. The readings are uniquely personal and, as such, variable; but when the music is good, it's worth a hundred of anything else.

Sonically, the discs hold up pretty well, too. The recordings derive from sessions ranging from 1960 to 1971, with little difference among them. They are all full and warm and wide-ranging, with good breadth and detailing. My only minor disappointment is that EMI appear to have used the same 1990 masterings they used for their earlier CD release and don't seem to have remastered the set using their newer Abby Road Technology (ART). Still, it probably doesn't need much further work, and there may not have been much more they could do with it, anyway. The recordings sound just fine.