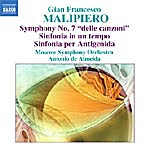 One advantage of a record company like Naxos that releases a good number of fairly inexpensive recordings each month is that it allows them to be a bit more flexible than other companies in the composers they cover. Thus, we get a lot of Naxos releases devoted to composers we may never have heard of. Such is the case with Gian Francesco Malipiero (1883-1973), an Italian composer reasonably well known in his lifetime, who has since fallen out of favor.

Malipiero was quite the prolific writer, having composed seventeen symphonies (and symphonies he called "sinfonias") plus a number of operas, ballets, chamber, and choral pieces, as well as editing the complete works of Monteverdi. Naxos are now releasing as much of the man's output as possible, including the present recording, originally issued in 1993 on the full-priced Marco Polo label and reissued in 2009 as part of their budget-priced line.

The album, the fourth volume in a series of Malipiero discs, contains one "symphony" and two "sinfonias." Apparently, the man had a certain phobia about the naming of his compositions and at one point in his career said he had given up writing symphonies altogether. He went on to write seven more.

Things begin with the Symphony No. 7, written in 1948 and subtitled "delle canzoni" ("of the songs"), a sprightly, lyrical little work, scored for a normal-sized orchestra, though not very big by some standards, which may help to explain, perhaps, why the sound in it is so lucid. The Symphony doesn't seem so much a cogent whole as it does a succession of sometimes entirely unrelated melodies, yet it is pleasant enough, with touches of Copland, of all people, thrown in.

The Sinfonia in un tempo (1950) that follows is somewhat deceiving because it is not, as its title implies, in one tempo at all (marked Andante) but actually contains four distinct movements, albeit without pauses between them. It is longer than the Seventh, more complex, and more contemplative.  That said, it is also more tedious.

The program concludes with the Sinfonia per Antigenida (1962), the darkest, most foreboding, and most bizarre of the three symphonies on the disc. It is more interesting than the preceding Sinfonia, with some fascinating instrumental parts for piccolo and percussion. Even though it is busier than the other works, it maintains a consistent, if dour, tone throughout, held together, no doubt, as much by conductor Antonio de Almeida as by the writing of the composer.

While the studio sound Naxos produce with the Moscow Symphony Orchestra is not too warm in the opening number, without much body or bass, it has the advantage of being nicely transparent. In the two Sinfonias, we hear more mid-bass fullness, although it comes with a bit of edgy congestion in the loudest passages.

Email ThisBlogThis!Share to TwitterShare to FacebookShare to Pinterest
Labels: Malipiero