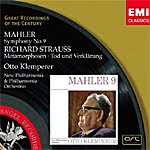 EMI issued this 1967 Mahler Ninth recording a few years earlier in their "Klemperer Legacy" series, but I never had the chance to buy or hear it. Which means I had not heard it since its old LP days and had quite forgotten how persuasive it is. Now that it's been remastered in EMI's "Great Performances of the Century" line, it appears to sound better than ever. In fact, it sounds better than practically anything currently on the market, new or old.

Although Mahler's last completed symphony was the crowning jewel in his symphonic cycle, beauteous and sublime, it has always been somewhat ambiguous. Many listeners have interpreted its expressionistic content as an optimistic journey into the light, ending in sweet and everlasting repose, while others have seen it as a pessimistic view of the world's future where degeneration and decay are our lot. I favor the former view, but I suppose there is something to be said for the second viewpoint as well. At the time of the work's composition in 1909, Mahler was aware that he was gravely ill, and in addition he may have foreseen the coming of the Great War and the end of civilization as his generation had known it. So, there is every possibility of interpreting the symphony optimistically or pessimistically. Klemperer, who first performed the work in 1925, just thirteen years after its première, knew the piece backwards and wisely took mostly the former course.

In my own view, the opening and closing movements are meant to be relaxed, serene, the first movement an admiration of life and all its beauty, the last a resignation of life's passing and a kind of contentment with what is yet to come. In between, Mahler provides some doubt, with a somewhat unruly yet bucolic second movement, followed by one of his patented, parodic Rondo-Burleskes. Whilst Klemperer judges these movements perfectly, he never aggrandizes them or makes them too alluringly lyrical.  Instead, he is a no-nonsense sort of guy who lets the music speak for itself.  And, of course, that's what Klemperer did best, allowing the structure of grand music to speak grandly. Even though I am also greatly fond of Barbirolli's performance with the Berlin Philharmonic (EMI) and Haitink's with the Concertgebouw (Philips), I believe Klemperer's reading deserves to be among their company in the top ranking.

Because Klemperer's Mahler Ninth is just a few minutes beyond the capacity of a single CD, EMI have spread it out over two discs, with the final movement on disc two, along with Richard Strauss's Metamorphosen and Death and Transfiguration. Klemperer recorded the Strauss pieces in 1961, also with the Philharmonia Orchestra but several years before he did the Mahler, and the sound is of the same high quality as, maybe even better than, the 1967 sound.  In both cases, it is superb:  detailed yet natural, with a wide stereo spread, good orchestral depth, and a warm ambient bloom. I know that Barbirolli, Abbado, Haitink, Karajan, Bernstein, and others have produced fine Mahler Ninths, but to my mind and my ears, none of them is any better than Klemperer's.  It is a joy.