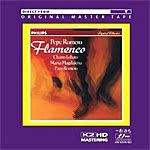 There is no doubt this K2HD LIM remastering of the 1988 Philips album "Flamenco" sounds fabulous. The dynamic range is exceptionally wide; the transient attack and impact are as strong as they could possibly be; the width and depth of image places the performers at realistic distances across and behind the speakers; and the whole show possesses an ambient naturalism that puts the listener in the very room with the artists. The sound is superclean and amazingly vivid.

The only problem I had with the music is that I don't personally care all that much for flamenco. Understand, I love Pepe Romero's guitar playing, and I have a number of his recordings, including a Mercury disc of flamenco music he made almost thirty years before this one.

The Romeros obviously have flamenco in their blood, and Pepe was probably born with a guitar in his baby hands. The playing here is terrific, to say the least. But for me, a couple of the tracks became a little nerve-wracking, especially the several cuts that contain dancing, which started to give a bit of a headache. Nor did I particularly care for Chano Lobato's singing in several other numbers.  Fortunately, that still left enough purely instrumental tracks that I could appreciate fully.

As I say, this is splendid flamenco playing, one of the best flamenco albums ever recorded, and LIM's disc reproduction does it justice. If you like the music, I'd have to say this one is a must.

Email ThisBlogThis!Share to TwitterShare to FacebookShare to Pinterest
Labels: Flamenco