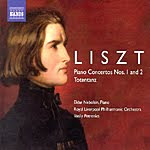 Naxos must have sensed something special about this disc because they gave it special treatment with a fancy slipcover. They were right. The disc is special, with excellent performances and excellent sound, a secure investment all the way around.

It seems appropriate that pianist Eldar Nebolsin won first prize at the first Sviantoslav Richter International Piano Competition in 2005; Nebolsin's interpretations of the two Liszt piano concertos remind one quite a lot of Richter's famous recordings. Nebolsin is bold when he needs to be and remarkably poetic, too, producing a First Piano Concerto that is both grand and lyrical. Sometimes it isn't as easy to pull off it seems.  Liszt wrote the First Concerto in four short, cyclically connected movements, unusual in itself, and they are played without a break. Nebolsin brings it off brilliantly.

In the Second Concerto, which is graver, more serious, and, as critics would say, more mature, than the First, Nebolsin is appropriately more somber. It's interesting that the Second Piano Concerto never became anywhere near as popular as the First, though, so what do critics know. Nebolsin makes the First Concerto seem cheerful and outgoing by contrast. The accompanying Totentanz is similarly charged.

Naxos engineers provide the piano and orchestra with good, clean, wide, robust sound. It's smoother than the old Richter recording on Philips and a bit more transparent than the Brendel recording, also on Philips, although not quite as warm. For a new digital recording at a low price, the Naxos appears to my ears if not a first-place recommendation certainly a surefire addition to a short list of recommendations.