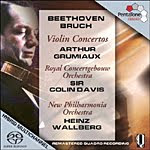 After an evening of close and careful listening, it is my expert, absolute, and unequivocal opinion that it's a toss-up.  Let me explain.

Around 1974 Henryk Szeryng recorded the Beethoven Violin Concerto with Bernard Haitink and the Concertgebouw Orchestra for Philips. Around the same time Arthur Grumiaux recorded the same concerto with the same orchestra, this time with Colin Davis, and again for Philips.  I always confused the two releases, but ultimately I came to like Szeryng's better-controlled (though marginally slower) account to Grumiaux's smoother, more romantic, but slightly more lax version.  After an hour or so comparing this new PentaTone SACD remastering of the Grumiaux performance to Szeryng's, I still confuse them.

Choice in the Beethoven Violin Concerto is certainly a wide-open field with dozens of fine competitors, but I'd still say these two are leading contenders for top honors. The ultimate choice between them, however, might be dependent on what the listener prefers for sound and coupling. PentaTone got hold of some of Philips's multichannel tapes, so if you own SACD playback equipment, you can listen to Grumiaux in surround sound. I listened to both discs in two-channel audio, though, through both a standard CD player and an SACD player. The PentaTone disc, you see, is a hybrid that can be played in regular two-channel, SACD two-channel or SACD multichannel. I found the PentaTone sound for Grumiaux a tad fluffy, misty, reverberant, and the ordinary Philips disc for Szeryng a bit tighter and better defined.

As couplings, the Philips offers Szeryng and Haitink performing the two Beethoven Violin Romances as well as they've ever been done; and the PentaTone has the Bruch Violin Concerto No. 1, with Heinz Wallberg conducting the New Philharmonia Orchestra.  While the Bruch sounds even bigger than the Beethoven, there is no denying it is striking, and both of the PentaTone offerings probably sound even more impressive in surround. Tough choices, but if you're into SACD, you probably can't go wrong with the Grumiaux issue. For regular stereo listening, probably Szeryng.