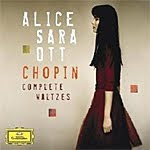 For the past four decades or so I have been quite content with Arthur Rubinstein's RCA recordings of the Chopin Waltzes on LP and CD, his perfectly chiseled renditions having weathered the tests of time. So it is with strong competition that any recording, like this new one from Alice Sara Ott, enters the field. Yet, Ms. Ott's interpretations are different enough, her passions strong enough, and her technical expertise proficient enough to make her new DG release more of a complement to Rubinstein's album rather than a rival to it.

Here's the thing one cannot help noticing in the first few Waltzes: Ms. Ott is more mercurial than Rubinstein. She exercises a wider and more-flexible range of tempos and dynamic contrasts than Rubinstein, pausing more often, changing up more often, speeding up and slowing down more often. Perhaps this is attributable to her age, early twenties when she recorded the program in August of 2009. Where Rubinstein is rock steady, Ms. Ott is more volatile, which, as I say, makes her disc worthwhile for its variation of approach. Nevertheless, she is never anything less than lyrical and poetic throughout, and she displays a genuine love of the music. When she needs to be playful, her music is playful; when she needs to be rhapsodic, she's rhapsodic; when she needs to be melancholy or somber or nostalgic or Romantic, she is up to the task. These are delightful interpretations in almost every way, even if they're not so conventional nor so authoritative as Rubinstein's.

Another thing in favor of Ms. Ott's disc is that she is one of only a handful of artists who performs all of Chopin's Waltzes, including the five or six that researchers discovered long after the composer had died. And she prefers to perform them from the original autograph manuscripts, regarding the autograph scores as truer than later published versions. Her attempt, she says, is to find "the true smell, the true colour" of each piece.

The DG recording engineers were also apparently attempting to capture true colors, in their case the true color of Ms. Ott's piano, a job the company usually do quite well. I have always enjoyed DG's piano sound, and they do not disappoint one here. The piano is never too close or too far away but miked at a moderate distance to simulate a stage performance from a few rows distance. While the sound is smooth and warm, to be sure, it is also nicely detailed, although not quite up to the standards of Rubinstein's old recording, which still sounds exceptionally good. Regardless, Ms. Ott's recording might just please more modern listeners with its velvety tones.  The audio, therefore, reinforces a fine set of performances.

Incidentally, DG use a Digipak for this release, which continues to mystify me. People in the industry tell me Digipaks actually cost record companies more than standard jewel cases, so I have to assume the companies feel the public prefers them. Yet for me the Digipak is scary because if it breaks in any way, it's over.  It's not like you can simply buy another jewel case. Well, it's neither here nor there.  The packaging does look nice, I suppose.