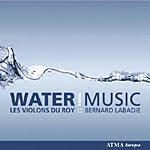 If it's authenticity you're after, I'd suggest Guglielmo and L'Arte dell'Arco (CPO), Pinnock and the English Concert (DG Archiv), McGegan and the Philharmonia Baroque (Harmonia Mundi), or Savall and Les Concert des Nations (Astree), all of whom play on original period instruments and in an approximation of period style. But if you are simply looking for an enjoyable version of Handel's celebrated Water Music played on modern instruments, ATMA's 2007 recording with Bernard Labadie and Les Violons du Roy may be another consideration.

If we can believe a newspaper account of the day, a barge carrying some fifty musicians accompanied the King down the Thames, presumably playing Handel's music for His Majesty's amusement. If so, then the Canadian ensemble Les Violons du Roy is short by half, comprising as they do about two dozen players. And they perform on modern instruments. However, the booklet note tells us they have been strongly influenced by recent research into the performance practice of the seventeenth and early eighteenth centuries. If that is also true, you could have fooled me. Their style is their dominant feature, and it seems to me quite modern, insofar as it is smooth, rhythmically well balanced, and lyrically well developed. The performers play with enthusiasm and impart a joy that is undeniable, but at the same time their interpretation of the music is flawlessly fluid, polished, refined, flowing, and seemingly effortless. This is Water Music so graceful, you'd think it was done in water colors.

The group's relatively small size imparts a greater intimacy to the music as well as offering somewhat greater transparency to the sound. ATMA engineers recorded the music in the orchestra's new concert hall, and it provides a fine, resonant, yet entirely natural acoustic. The ensemble is well spread out, with reasonable depth, taut low end impact, and a pleasant bloom.

Caveats? Two, both minor. Many of the most-recent releases of Handel's Water Music have included as a coupling the composer's Music for the Royal Fireworks. They make natural companions, and a seventy-five-minute CD easily accommodates them both. Here, however, in addition to the standard three Water Music suites (no one's sure what was actually played at the music's première), we get only a few minutes of excerpts from Handel's Solomon, the overture and "The Arrival of the Queen of Sheba." My other concern is that ATMA's cover art is so minimalist, so simplistic, that it will not attract many new potential buyers who see it. This is music that cries out for the reproduction of a painting of barges on the Thames or something that might draw one's attention.

But nothing can defeat the music. Remember, my test of anything new to me (music or recording) is whether I want to return to it soon. I listened to this one a second time immediately.