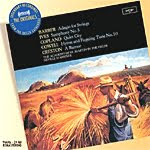 It's surprising, isn't it, how sometimes the simplist tune can become a hit, then a classic? Take Samuel Barber's little Adagio for Strings, for instance. It started life as the slow movement of his String Quintet, and in the late 1930s he arranged it for string orchestra. It became an instant success, and it has been popular ever since; yet it is really nothing more than a single brief passage repeated several times in several different ways.

The Adagio has never sounded more beautiful than under the direction of Neville Marriner and the Academy of St. Martin-in-the-Fields, back in the days (1976) when they were still hyphenating their name and doing their recordings for Argo. This Decca Originals brings together the Academy's acclaimed album of short, twentieth-century American works, which also includes Charles Ives's Third Symphony, Aaron Copland's Quiet City, Henry Cowell's Hymn and Fuguing tune No. 10, and Paul Creston's A Rumour. Marriner and the Academy play them straightforwardly, incisively, without a hint of sentimentality or undue exaggeration.

The Decca engineers remastered the collection in 96kHz/24-bit sound, which brings out all the detail and warmth of the music and the music making. There is a very slight edge to the upper midrange, common to many Decca recordings of the day, but it is quite faint and should not present an issue for most listeners.

Email ThisBlogThis!Share to TwitterShare to FacebookShare to Pinterest
Labels: Barber