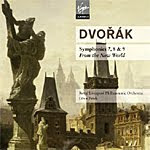 Thank heaven for reissues. It's pretty hard to keep up with new recordings, even today when the number of new classical releases has dwindled quite a lot. But in the Seventies and Eighties, it was almost impossible to listen to everything that came out. So, these Dvorak symphonies from conductor Libor Pesek sailed right by me. Indeed, I'd never even known about them until this budget-priced set came along. More's the pity for me, too, because I've missed out all these years. Fortunately, it's never too late.

For some time I've been recommending Colin Davis's Concertgebouw set of Dvorak's last three and most-famous symphonies on a mid-price Philips Duo, at least for buyers interested in all three symphonies at a low price. Good sound and good performances, hard to beat. Until now. At just over half the cost, this Virgin set from 1988-89 must currently take pride of place. Not only are Pesek's performances as good or better than Davis's, the sound is more dynamic and transparent.

Critics often consider Dvorak's Symphony No. 7 his darkest work, which is not quite how Pesek handles it. Pesek presents it as more bucolic and folk-inflected than most other conductors' interpretations, and for me at least, it works. Truth be told, I've never really cared overmuch for the Seventh, until now, and Pesek has made me a believer. The Symphony No. 8 is, of course, Dvorak's most pastoral, most melodic, most cheerful symphony, usually performed as a direct contrast to No. 7. Yet here, Pesek points up the similarities, while still maintaining the piece's inherently joyous spirit.  It is a delight.  Which brings us to No. 9, "From the New World," where Pesek's relaxed manner is perhaps a touch wanting in pure adrenaline. I'd like to have heard greater spark and spontaneity, but, then, I'm used to Kertesz's celebrated LSO version (Decca), and hardly anything stands up to that.

The sound the Virgin engineers afforded Pesek and the Royal Liverpool Philharmonic stands up well by any standards. It is a tad forward and edgy in the upper strings, true, but only on occasion, and it could have done with a bit more deep bass. Otherwise, it has fine depth and breadth and an enormously wide dynamic range. By comparison, the Concertgebouw under Davis seems overly warm and a touch veiled.

Buying separate discs with different conductors continues to be a person's best bet in building a classical library, and in this repertoire you'll find a number of worthwhile contenders. Still, most people reading this review probably already have favorites in their collection and are interested in alternative interpretative viewpoints. For all three final symphonies at a bargain price, Pesek is hard to beat, whether you're just beginning a library or you're an avid collector.