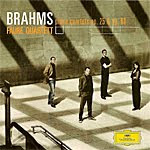 Many small chamber works--quartets, quintets, and the like--remind me in tone and structure of miniature symphonies. None more so than the two quartets presented here, Brahms's Quartets Nos. 1 and 3 for Piano, Violin, Viola, and Cello. Although their four-movement construction obviously mimics larger-scale pieces, it's more a matter of Brahms's large-scale vision that tends to make me think of things symphonic. If Brahms had orchestrated these two works for full orchestra, they might have made splendid symphonies for him. In fact, Arnold Schoenberg in 1937 did transcribe the First Quartet for orchestra and humorously called it Brahms's "Fifth Symphony."

Yes, these two small-scale chamber works bear all the hallmarks of Brahms's symphonic style, and the Faure Quartett perform them in a most satisfactory and unified manner. The Piano Quartet No. 1 in g-minor, op. 25 begins with a big Allegro containing a number of alternating sentiments, setting the stage for the elaborate harmonies to follow. The Intermezzo is surprisingly glib and playful; the Andante is charming and lively, more than a little reminiscent of Schubert; and the Rondo finale is sprightly and quick, with a gypsy feel to it.

Brahms called his Piano Quartet No. 3 in c-minor, op. 60 "suicide music," presumably because of its somber nature. The booklet note suggests the composer may have been in a doleful mood when he wrote it because of his prolonged love for the wife of his best friend, Robert Schumann, a love that could not be. In any case, the music may be in the sorrowful vein of much Brahms, but it's lovely and heartfelt as well. The opening Allegro provides the proper degree of grave sobriety. The second-movement Scherzo is brief, fleeting, and fast, while also being quite earnest and practically a work unto itself. These preliminary movements lead to the centerpiece, the heart, of the composition, the Andante, where Brahms registers his most serious notes of melancholy and creates some of the most-poignant and affecting music in any of his oeuvre. It leaves one rather emotionally drained and spent, but to the good. The Allegro Finale that concludes the work is almost anticlimactic at this point, as we really don't need anything more to break the mood; however, it manages to follow up in an appropriately well-tempered spirit, with intimations of Beethoven along the way.

The Faure Quartett, formed in 1995, consists of Erika Geldsetzer, violin; Sascha Frombling, viola; Konstantin Heidrich, cello; and Dirk Mommertz, piano. They play with sensitivity, refinement, and grace, and, more important, they play as one. Although their instruments intertwine and support each other, they sound of a whole, a single instrument getting into the music, with no single player dominating despite the titles of these works being "piano" quartets.

DG's sound complements the Faure Quartett's singleness of purpose, making the group appear larger and grander than a mere four people. The sonics are warm, fairly close, yet fairly soft. Overall, the sound is quite smooth and agreeable and helps the music go down most comfortably.