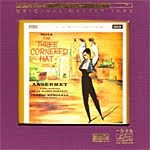 Manuel Maria de Falla y Matheu's ballet The Three Cornered Hat, a lighthearted tale of attempted seduction, contains some of the most colorful music you'll find coming out of Spain, and Ernest Ansermet's 1961 Decca recording of it contains one of the best all-around performances and some of the best sound the music has ever received. This is not surprising, though, as Ansermet premiered the work in 1919, and Decca was in 1961 at the peak of its recording prowess.

The recording has been an audiophile favorite since the very beginning, but my trouble was, I hadn't heard it in many years, my one and only experience with it being on vinyl at a friend's house, where I thought it sounded hard and glassy. Now I discover it was most likely more the stereo system's fault than the recording's, because this new LIM XRCD/24 remastering shows it to be splendid.

From the very opening notes, you'll find yourself amazed at how well such an old recording can sound.  This should come as no surprise, though, as I say. Audiophiles have known it for years. The dynamics, frequency range, and stereo spread are wide and the sonic impact is strong, yet the sound retains a realistic sense of warmth and balance as well. By comparison, the equally good Dutoit Montreal performance on a Decca digital sounds lighter, less substantial, and, yes, harder and glassier. Go figure. Certainly, the LIM remastering by engineer Paul Stubblebine and producer Winston Ma is meticulous enough to maintain all of the master tape's most subtle as well as more overt qualities, and the result, though fairly expensive, is enough to make one look forward to all such remasters from this source.

In the meantime, enjoy The Three-Cornered Hat and its companion piece, the brief "Interlude and Dance" from La Vida Breve.  They are both of them the best you can get.