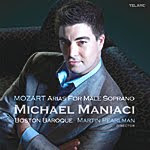 This one might take a little getting used to. As first listening, one would easily mistake Michael Maniaci's voice for that of a woman's. But a few minutes in, and you begin wondering if the voice isn't just a little huskier, a little more robust, or a tad mellower than the usual soprano.

Telarc's booklet notes inform us that castrati voices were common throughout Europe from about the mid-sixteenth century on, owing to the Bible's injunction against women speaking in churches (I. Corinthians, 14:34). By Mozart's day, however, people generally frowned upon the practice and it began dying out. In the composer's later life he was transcribing his parts for castrato voice for tenors.

On this disc we get five arias from three of Mozart's operas for which he originally wrote castrati singing parts, Idomeneo, Lucio Silla, and La Clemenza di Tito, plus the solo motet Exsultate, Jubilate. The album lasts just over an hour, and Boston Baroque Orchestra accompany Mr. Maniaci, who describes himself not as a "castrato," thank heaven, but as a natural male soprano. As he says, "While my vocal cords lengthened and thickened somewhat, they didn't do so to the extent that most men experience." Therefore, not only do we get to hear something resembling the male castrato voice, we get to hear Mr. Maniaci supported by an orchestra playing on period instruments, much as Mozart would have heard.

Of course, it's impossible to know exactly what any voice or any orchestra actually sounded like in the days before recordings, but I think we can be comfortably sure that this is a pretty good approximation.

The question, I suppose, is why we should care whether Mr. Maniaci's voice approximates an actual castrato or not. I mean, after all, by the twentieth century the castrati were practically nonexistent, and women had taken over the high notes. So, is Maniaci's voice a mere curiosity, is it a reminder for the purist of days gone by, or is it a genuine listening pleasure for the here and now? I'd say the latter.  The voice may appear a touch odd at first, and one might wonder why a woman or a counter-tenor hadn't just done the singing. But as you listen, you begin to hear the sheer beauty of Maniaci's tone, a sound quite unlike anything a woman or a man generally produces.

As for Telarc's sound, it complements the voice, being somewhat mellow and warm itself. Don't expect ultimate transparency here, though. The acoustic is rather underwhelming for audiophiles expecting more air around the instruments, more stage depth, more clear-cut definition, and the like. Instead, you may find the sound somewhat veiled and soft; yet, as I say, that's probably what Mr. Manciaci's voice needs to make the best impression.