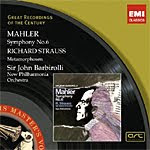 Here's another classic that the folks at EMI have remastered in their "Great Recordings of the Century" series. I'm not sure this 1967 recording from Sir John Barbirolli is actually a "Great Recording of the Century," given that it presents a highly idiosyncratic view of Mahler's Sixth Symphony, but who am I to argue. I know I've always liked the interpretation, whether it's pure Mahler or not.

Establishing its tone in the first moments, Barbirolli offers a performance of lingering contemplation from the very start, the conductor lovingly dwelling on and sustaining Mahler's dark, tragic, often grotesque moods. It is not a reading I could recommend without caution, yet it is one I would not personally want anywhere but at the top of my own personal list. For the not-so-adventurous listener, there are still good performances from Haitink (Philips), Abbado (DG), Szell (Sony), Solti (Decca), Bernstein (Sony), Horenstein (Unicorn), Tennstedt (EMI), Karajan (DG), and others, with their more-conventional, but for me ultimately less-involving, styles.

Anyway, Barbirolli offers up a vision of Mahler that is quite broad, appropriately ambiguous, a little goofy in the Scherzo, lovely in the Andante (which comes as the second movement, according to Mahler's revised order), and filled with the conflicting moods of love and death, doom and gloom that Mahler enjoyed exploring.

Along with the Sixth Symphony we get Barbirolli's performance of Richard Strauss's "Study for 23 Solo Strings," called "Metamorphosen." Strauss wrote it at the end of World War II as a sort of elegy, the music sublimely suggesting--hoping--that something different, something changed for the better, would rise from the ashes of the horror.

EMI's sound could hardly be better. It is without doubt the best sound the Sixth Symphony and maybe even "Metamorphosen" have ever been afforded, better even than Haitink's fine digital release of Mahler. Coming from 1967, the middle of EMI's golden age of producers and engineers Bishop, Parker, Anderson, and Brown, the sonics are clean, well balanced, wide-ranging, and naturally transparent--a joy to listen to, and now made a touch smoother through EMI's Abbey Road technology. Of course, the clarity of the new medium makes Sir John's audible contributions all the more apparent--you'll hear him wheezing throughout the proceedings--but they are a minor distraction in an otherwise treasurable recording.