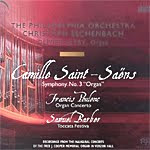 I believe it is a law that any orchestra that gets a new organ must christian it by playing Saint-Saens's "Organ" Symphony. Such is the case with the Philadelphia's new Fred J. Cooper Memorial Organ, which the booklet note says is "the largest concert hall organ in the United States. Built by Dobson Pipe Organ Builders, Ltd. of Lake City, Iowa, it has 110 stops and 6,938 pipes ranging from the size of a drinking straw to two feet square by 32 feet in length."

Certainly, all 6,938 pipes are on prominent display here, with Philadelphia's Eschenbach excelling in the two opening numbers, Barber's Toccata Festiva and Poulenc's Concerto for Organ. Both pieces are extremely well played and generate a good deal of spirit. It is in the more-familiar Saint-Saens that we find only a middling performance. Things start out well enough with a relaxed opening movement and then a deliciously serene Adagio. But when the music starts to heat up in the second half, Eschenbach sometimes substitutes speed for excitement, and by the time of the finale, his conducting takes on a somewhat foursquare, oddly mechanical feeling. Not that any of the reading is bad, mind you; it's just a little different, and neither as exhilerating nor as smooth as my two favorite interpreters of this work, Fremaux on EMI and Munch on RCA/JVC.

Ondine recorded the organ's inaugural performance live in May of 2006, but you'd hardly know it was live until the unfortunate eruption of applause at the end. There is an excellent sense of space and depth to the sound, with a dynamic range so wide that if you are tempted to turn the volume up during the "Organ" Symphony's quiet opening chapters, you'll get knocked out of your seat as the piece moves on. The bass is also deep and satisfying, something necessary for the piece to work, but, to be fair, it is no deeper or more comforting than the bass on the Fremaux disc.

Incidentally, at the very bottom of the back of the jewel box and slipcover, you'll see the designation "SACD."  I have no idea if the disc is recorded in more than two channels because nowhere does the booklet say, and I have an SACD player hooked up only to a two-channel system. But it is a hybrid disc, playable on SACD or regular CD machines, and I did notice a very slightly, very marginally wider response from the SACD layer than from the CD layer.