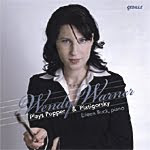 This is one of those discs where even if you're not a classical music fan, you can still enjoy the sonic experience. It's another beautifully recorded album by Cedille's chief engineer, Bill Maylone, that makes the performers sound as though they're in the same room with you. Granted, these are duet pieces, and perhaps it's easier to capture the sound of only two instruments easier than it is to record an entire orchestra. Still, you can take nothing away from the audio, the cello and piano appearing in proper size and perspective, with appropriate air around each and a dynamic impact that places them clearly on stage before you. Very impressive.

Of course, no matter how good a disc sounds, it would be of no value if the music and performances weren't up to speed, and in both cases this album passes the test. The music comes from two composers who were primarily known for their cello playing, David Popper (1843-1913) and Gregor Piatigorsky (1903-1976). Popper was a mainstay of the cello world in the late nineteenth century, Piatigorsky a mainstay in the twentieth century, yet they had time to compose works for their instruments as well. Companies don't record either composer much nowadays, but maybe they should.

Popper is represented by three works: The highly romantic Suite for Cello and Piano in four movements, the collection of brief pieces called Im Walde, and three short compositions that Popper probably played together or separately as encores. Of the various Popper works on the disc, it's Im Walde that stands out. Its title means "In the Forest," and its six movements evoke forest settings and moods. Popper originally arranged it for cello and orchestra, and here we have it for cello and piano, which makes it even more intimate in its portraiture. The movements range from rhapsodic to lyrical to intense to nostalgic and just about everything in between.

Piatigorsky is represented by his Variations on a Paganini Theme, which he wrote in 1946 as a series of whimsical takes on his musical friends. He wrote and arranged each of the work's fifteen Paganini theme variations in the style of one of the world's great musicians of the time: Pablo Casals, Paul Hindemith, Yehudi Menuhin, Nathan Milstein, Jascha Heifetz, Vladimir Horowitz, etc., even himself. Although the variations themselves tend to become more than a little repetitious, the idea behind them is certainly imaginative.

Needless to say, cellist Wendy Warner and pianist Eileen Buck play all the music with loving enthusiasm and expert articulation. Even though Popper and Piatigorsky intended this music to highlight the cello, the way Warner and Buck play them, it's not exactly one instrument accompanying the other as much as two instruments almost equally sharing the spotlight. Warner and Buck make an excellent team, and Cedille engineer Maylone captures them in perfect unity. It's a lovely recording all the way around.

Email ThisBlogThis!Share to TwitterShare to FacebookShare to Pinterest
Labels: Popper