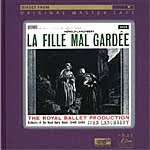 La Fille Mal Gardee is a rustic ballet originally produced around the end of the eighteen century (1789), based on a number of folk tunes and subsequently arranged in any number of different versions. The one we have here was put together around 1960 by John Lanchbery, based on an 1828 arrangement by Ferdinand Herold (of Zampa fame). The music tells the story of a comically difficult romance between a farmer's daughter and her lover, complicated by the appearance of a young dunce favored by the girl's mother. The music is lively, earthy, sometimes unpolished, but always entertaining. Lanchbery's direction of the Covent Garden Orchestra is equally lively, never unpolished, and certainly entertaining. In fact, I can't imagine hearing the music played any other way.

This 1962 Decca release, remastered by LIM (Lasting Impression Music, a part of producer Winston Ma's FIM, First Impression Music group) in JVC's 24-bit XRCD super-analogue process, is the fifth incarnation of the recording I've owned over the years. I started with a London LP, moved up to a Decca LP when I was able to obtain it, then the regular CD from Decca, followed by a gold CD from Classic Compact Discs, and now this LIM edition. With each succeeding release, I have heard very minor but distinct improvements in sound.

For this review I first listened straight through the new remaster and found it impressive, indeed. Then I A/B compared it to the gold edition, and I was further impressed. The music has a very wide stereo spread and fairly good orchestral depth in both versions, but the LIM is noticeably fuller, smoother, more dynamic, and better focused. By contrast, the gold CD is a tiny bit harder and leaner. The LIM gives the impression of a bigger, more dramatic, more realistic recording. But if I had to single out any one area of improvement in the LIM, it would be focus. It is as though you were looking through the viewfinder of a camera and adjusting it just so in order to obtain a marginally clearer picture. It's not a night-and-day difference, mind you--nothing is--but you'll hear it, especially in the massed strings and percussion. Depending upon your playback equipment, you may even be bowled over by it. For a recording made in 1962, La Fille Mal Gardee sounds better than 99% of the classical albums being made today.

Of course, you pay a price for improvement, and the price may not be commensurate with the small differences you'll hear. I'd like to say you can get the FIM, LIM, or JVC XRCDs at a budget price, but you can't. They are premium-priced products for the discriminating audiophile. For ultraprecise XRCD/24 processing and the like, you pay through the nose, usually twice the cost of a full-priced CD, and in return you get subtle but often discernible improvements in sound. In the case of this LIM remastering, you also get a clothbound album cover, plastic insert pages, and a static-resistant disc sleeve. If none of this interests you, you can always buy the regular Decca CD release (because the gold edition is no longer available and would cost as much as the XRCD in any case).

Email ThisBlogThis!Share to TwitterShare to FacebookShare to Pinterest
Labels: Herold