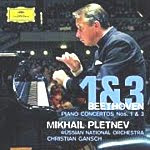 Late in 2006 pianist and conductor Mikhail Pletnev embarked on an ambitious project:  To record all five of Beethoven's piano concertos and all nine of the symphonies over a period of several years.  This recording of the Piano Concertos Nos. 1 and 3 is the first entry in the series.

Pletnev may look like a pretty somber guy from his photographs, but his playing is anything but dismal or gloomy.  In both concertos, the man shows spark and zest in the outer movements, creating excitement and generally happy spirits galore, while displaying great sensitivity in the slow movements, where he is probably even better.  Actually, those outer movements can sometimes seem a tad too fast in places, whereas he takes the Largos at a more conventional pace, yet with much feeling.  The pianist's virtuosity is never in question, and Christian Gansch's conducting of the Russian National Orchestra is always sympathetic.  I would have to place these performances in the top ranks of currently available renditions, right up there with Kovacevich (Philips), Perahia (Sony), Ashkenazy (Decca), Kempff (DG), and other such notables.

DG made the recordings during live performances in September, 2006, and you would hardly know they were live.  Occasionally, during quiet passages, you can hear some minor wheezing or shuffling of feet, and at the conclusion of the program the audience erupts into an unfortunate applause (edited out of the first piece).  Otherwise, the sound is quiet, fairly close, warm, natural, and wide spread, with a realistic piano appearing not too big or too small in relation to the orchestra.  The sonics may not have quite the clarity of a studio recording, but they are comfortable and pleasant.