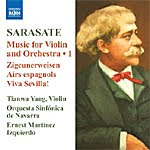 Pablo Sarasate (1844-1908) was a virtuosic Spanish violinist who was also a noted composer (or vice versa).  On this disc we get seven of his short violin works for orchestral accompaniment, played by violinist Tianwa Yang, who previously recorded several highly regarded Naxos albums of Sarasate's music for violin and piano.  The addition of the orchestra only makes a good thing better.

The album begins with Sarasate's Zigeunerweisen (Gypsy Airs), one of the most famous pieces of "gypsy" music in existence, coming to life and showing its stuff in the second half after a lengthy introduction.  It's the kind of work that puts a violinist's full range of abilities on display, and Ms. Yang comes though unscathed.  Both she and the Orquesta Sinfonia de Navarra shine, lighting up the room with their electricity.  One hardly notices the orchestra, though, what with Ms. Yang putting on such an exhibition of technical prowess.

The Airs espagnols that follows is, for me, an even better piece of music than Zigeunerweisen, although it never attained the popularity.  The Airs espagnols perfectly captures the spirit of the Spanish countryside in a series of delightful folk tunes and original melodies.  For this brief, ten-minute, work alone the disc is worth its budget price.

The other music falls in line, with the Peteneras: Capriccio espagnol among the most multifaceted and lively, and the Nocturnes-serenade acting as a sort of calming rest stop in the procession of pyrotechnics on display in the rest of the music.

The sound that Naxos engineers capture is close and highly impressive, suiting the sweep of the music-making.  Although it does not exhibit a lot of orchestral depth, it does produce a clear, sharply defined presence, with excellent dynamics.  Fortunately, there are no traces of edginess, brightness, or glassiness to the sonics, so despite the closeness of the recording, things remain fairly smooth and warm throughout.

Trivia note:  Sarasate himself founded the Navarra Symphony Orchestra in 1879, making it the oldest active ensemble in Spain and, therefore, wholly appropriate to playing the man's music.

Email ThisBlogThis!Share to TwitterShare to FacebookShare to Pinterest
Labels: Sarasate