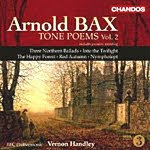 English composer Arnold Bax (1883-1953) wrote in 1943, "I was until quite recently about as instinctive (an) artist as could be found. I passed unperturbed during the last war, turning out my romantic stuff in an unending stream, and it was only very gradually that I realized that I was marooned upon a lonely rock with scarcely a companion...."

Bax wrote many of his most famous tone poems and symphonies before and just after the First World War, the War being a great turning point in the outlook of many other artists, bringing with it an end to Romanticism as we know it and a beginning of a harder, more-cynical age. But Bax carried on with his "Nature poems for orchestra," as he called them, almost until his death. More is the blessing for us.

I admit to being a fan of the man's work. He was doing in England the kind of thing that Sibelius was doing in Finland, although on a less imposing (and probably less financially rewarding) scale. Bax was describing the English landscape, as the titles of the short works in this second volume of tone poems indicate: "Three Northern Ballads" (1931-34), full of wind and rocks and forests; "Nympholept" (1912), full of capering wood nymphs (despite what the title may suggest to you); "Red Autumn" (1912), less outright descriptive and more impressionistic than the others; "The Happy Forest" (1922), full of pastoral inspiration; and "Into the Twilight" (1908), after a poem of the same name by W.B. Yeats, full of Celtic atmosphere.

Vernon Handley is an old hand at this sort of music and performs it with ease. He and the BBC Philharmonic convey all of the works' character and feeling--the cool winds, stormy coasts, and enchanted woods coming through with honest affection. The Chandos sound could be a little stronger in the deep bass and perhaps a tad smoother in the treble, but there is a depth and breadth to the orchestral field that makes up for it. It's a lovely album.