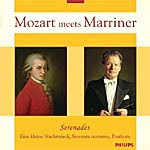 I'm going to make a guess here and say that Mozart's Serenade in G, K.525, "Eine kleine Nachtmusik," may be the most familiar music in the world.  OK, I'll grant you "Happy Birthday" and "Jingle Bells" are popular, too.  Certainly, the "Little Night Music" Serenade is one of Mozart's most familiar tunes.  Meaning it's been recorded by everyone everywhere, and you can find it done up by full modern orchestras, period bands, chamber ensembles, and probably singing reindeer.  But you won't find it done up any better than by Sir Neville Marriner and the Academy of St. Martin-in-the-Fields on this reissued Philips recording.

Marriner was never an extremist, so you'll find this performance pretty much middle-of-the-road, which is probably the way most of us want it.  There is always room for a new, invigorating reading by a new gung-ho group, but for a first choice in this repertoire, it's best to play it safe.  That would be Marriner, Boskovsky, and maybe I Musici.  Yes, Marriner and the Academy did the piece for EMI in an even more refined manner, but here he is as relaxed and joyful as he can be.  And accompanying the "Nachtmusik" are the Serenade in D, K.239, "Serenata notturna," and the Serenade in D, K.320, "Posthorn."  They are equally well played and well presented.

Given that this is a budget-priced collection, the sound is remarkably good.  The "Nachtmusik" has a tad more ambient bloom to it than the other two works, but it never distracts from the music.  If you are looking for ultimate sound reproduction, FIM has remastered the "Serenata notturna" in XRCD processing, and there you will find it even smoother, more transparent, and more dynamic.  But you'll also pay four times the price for it.  This Philips set is hard to beat, dollar for dollar.

The only minor cavil I would have is the Philips labeling.  First, on the back of the jewel box, they mark the four-movement "Nachtmusik" as 1-3, taking up with 5-7 for the "Serenata notturna."  What happened to #4?  Then, on the back of the booklet insert, they claim a production date of 1987 for the "Nachtmusik" and "Serenata," when clearly the "Serenata," at least, came from a 1967 Argo release.  Oh, well, it's the music that matters, not the fine print.