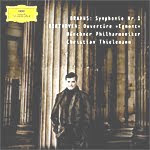 Beethoven pretty much intimidated everybody, and after his death composers were more than a bit reluctant to continue in the symphonic field.  Many of them felt that Beethoven had already said it all, and they were content to deal with concertos, operas, ballets, chamber music, and the like.  Brahms himself spent in excess of a dozen years mulling over the ideas for a symphony, finally revealing his Symphony No. 1 in 1876.  The public and critics hailed it a success, and it has more or less remained in the basic repertoire ever since.

So, the Brahms First Symphony is something of a historical precedent, which does not in my book necessarily make it a great piece of music.  I have always found the opening movement too messy, the Andante too overtly, lushly Romantic, and the third movement too boring, with only the Finale at all interesting, where Brahms saves up his big theme.  So shoot me; I'm not a purist.

Maestro Christian Thielemann does his best to inject some life into the piece, but he still manages only to drum up any serious fervor in the final chapter.  The keep case quotes a review of his live performances of the work saying they are "fiery," "menacing," "throbbing," "soaring," and "blistering."  I'm not sure those are the adjectives I would want to apply to any interpretation of Brahms.  Yet, I suppose you could say Thielemann does, indeed, work up a good head of steam in the opening and closing.  Unfortunately, I thought his steam escaped at the same pace and the same temperature throughout the four movements, so I would have liked a little more contact with the music itself and less emphasis on emotional melodrama.

Then there's the matter of the sound.  DG recorded Thielemann's Brahms First and the accompanying Beethoven Egmont Overture live in 2005.  As a comparison, I put on two old EMI recordings of the First, from Otto Klemperer (1956) and Adrian Boult (1973), and the sound I heard was like removing a couple of woolen blankets from the front of my speakers.  The DG audio is muffled and dull; it's dynamic, to be sure, but it's sorely lacking in high-end response, midrange transparency, and deepest bass.  The only saving grace of the live sound is the absence of applause at the end.