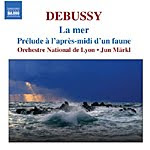 Maybe it's the conducting of maestro Jun Markl, or maybe it's the recording by producer and engineer Tim Handley, I don't know.  But the performances of the two lead pieces, La Mer and Prelude a l'apres-midi d'un faune, seem rather flat.

La Mer and the Prelude are among the most evocative tone poems ever written.  You can almost feel the sea breeze on your face listening to La Mer, and you can sense the warm afternoon sun and the faun's yearnings in the Prelude.  At least, you should be able to.  But here, everything seems fairly perfunctory, a run-through without a lot of creativity or emotion.  Part of this, as I say, may be the recording, which sounds soft and restrictive.  Except in the very last work, the sound never seems to become very dynamic or open up.  Instead, it simply appears distant and dull.

Fortunately, things perk up with the little dance number Jeux, as well as with the Children's Corner suite, the latter originally written for piano and orchestrated by Andre Caplet.  This second half is far more animated than the first two works on the program and for many listeners may save the day.

Be aware, however, that DG have now remastered Herbert von Karajan's 1964 recording of Le Mar and the Prelude and offer them along with Ravel's Bolero and the Daphnes et Chloe Suite No. 2 for just a few dollars more than this Naxos issue, the Karajan superior in every way.  What's more, you can buy multi-disc sets from Martinon (EMI) and Haitink (Philips) containing most of Debussy's most-popular music for a mid price that's hard to beat.