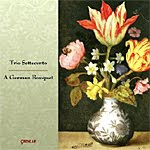 My appreciation and admiration for violinist Rachel Barton Pine grows with each new recording she releases.  Here she is joined by John Mark Rozendaal on viola da gamba and 'cello and David Schrader on harpsichord and positiv organ as the original-instruments group Trio Settecento in an album of German Baroque chamber music.  Combine the Trio's eloquent playing with Cedille's unparalleled audio reproduction, and you get yet another of Ms. Pine's exquisite recordings.

OK, I know that unless you are a hard-core classical music fan, most of the names except Bach may be unfamiliar to you.  But, understand, these were among the most-popular composers in Europe at the time.  That much of their work goes unrecognized or even unknown is sign of changing times and attitudes.  I can assure you that even though much of the music may seem repetitious, if you enjoy Baroque music at all, you will enjoy these pieces, most of them two-to-six movement sonatas, especially as they are played by so capable a trio of performers as we have here.  The Trio Settecento have been performing together on period instruments since 1996 and have entertained audiences the world over, live and on disc.  They cannot be faulted in realizations that are lively, poignant, and exciting by turns.  The performances are festive, imaginative, intense, and simply a joy to listen to.

Of course, it also helps that Cedille's chief engineer, Bill Maylone, again provides us with a first-rate audiophile recording.  Made in 2008, it's yet another one of those reach-out-and-touch-it affairs where you feel you are there with the performers in Nicholas Hall at the Music Institute of Chicago.  Whether it's the sonority of Ms. Pine's violin, the crispness of Mr. Schrader's harpsichord or the mellow resonance of the organ, or the glow of Mr. Rozendaal's 'cello or the warmth of his viola da gamba, the sound is as realistic as one could hope for, with no veiling, no undue resonance, no deviations from anything that doesn't sound entirely natural.  It's quite the lovely disc all the way around.