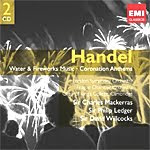 Because it's been the common practice these past twenty-odd years to record Handel's Fireworks and Water Music using period instruments, it came as a change of pace to hear these works using modern instruments in 1970s and early 80s performances.  Sir Charles Mackerras starts things off in this budget-priced, two-disc set with the Fireworks Music, utilizing what sounds like the entire London Symphony Orchestra.  Not that Handel didn't intend his music for a large ensemble; there is evidence to support the contention that over a hundred players were initially involved.  We just don't hear it that way much anymore.  Be that as it may, the LSO sound fine, and the music does take on a grandeur sometimes missing in smaller performances.  Indeed, when you play a period-instruments group for comparison, the latter might sound positively puny to you.  No complaints about the Fireworks Music, which comes off quite well (after a somewhat lugubrious start), with Mackerras adding plenty of zip and sparkle to the proceedings.

In the case of the Water Music, though, Mackerras tones things down a bit with the Prague Chamber Orchestra.  The ensemble doesn't have the sheer numbers of the LSO recording and it may not be on period instruments, either, but it does show a nod toward period interpretation.  The knock, perhaps, is that the performances are a shade on the cool, heavy, even conventional side, especially compared to the lively Fireworks Music that precedes it.  Interestingly, Mackerras would record this music some years later with the Orchestra of St. Luke's for Telarc in a much quicker-paced production.

On the second disc we find Handel's Coronation Anthems, with Sir Philip Ledger leading the Choir of King's College, Cambridge, and the English Chamber Orchestra; followed by Dixit Dominus (Psalm 109), lead by Sir David Willcocks and the same forces, plus soprano Teresa Zylis-Gara, mezzo-soprano Janet Baker, countertenor Martin Lane, tenor Robert Tear, and baritone John Shirley-Quirk.  These are exquisitely refined readings that show the composer and the performers at the top of their form.

As we have four different recordings here from four different years (1976, 1978, 1982, and 1965 respectively), we get different sound from each.  I found the Fireworks Music and the Dixit Dominus a trifle bright in the highs and light in the bass.  The Water Music seemed to fare best, but, then, it has the least in the way of frequency extremes and dynamics to deal with.  And while the vocal numbers appeared a little pinched and edgy to me, there is certainly no lack of clarity involved.