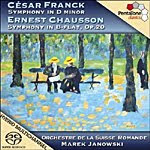 Until PentaTone released this disc, my reference standards for the Franck Symphony were Monteux's and Beecham's early recordings (RCA Living Stereo and EMI), and Dutoit's later digital effort (Decca).  Now, I'm not so sure, even if I still have a slight preference for Monteux.

It's good to hear the Orchestre de la Suisse Romande again, lead by their newest conductor, Marek Janowski.  The two works by Franck and Chausson couldn't suit the orchestra better, considering how well their most-famous conductor, Ernst Ansermet, used to love the French repertoire.  By comparison to Monteux's interpretation of the Franck piece, Janowski's account is almost as magical, if perhaps a bit more lax.  Dutoit, whose performance is also very good, seems more matter of fact, more suavely elegant, but a tad more mundane.  Monteux is the more reposed and more insightful of the conductors cited, whilst retaining plenty of excitement.  Janowski's music making is dramatic, to be sure, swinging from moody to energetic, but Monteux remains that much more ravishing in the central Allegretto, with its prominent English horn solo, and in the playfulness of the slender scherzo-like theme that follows.

If the Chausson Symphony sounds quite a lot like the Franck Symphony, it's no mere coincidence.  The younger Chausson was a member of Franck's group at the Paris Conservatoire, and he looked up to his mentor, patterning his Symphony on the same three-movement format as Franck's, with the final movement not exactly repeating but reminiscent of the material in the first movement.  If Chausson's Symphony doesn't have quite the charm of Franck's, it isn't for a lack of trying.  And Janowski plays both pieces in a similarly evocative, impressionist style.

As far as sound goes, Dutoit's newer digital recording is probably the most detailed, but this newer, 2006 Janowski recording, also digital and made in Geneva, is pretty good, too.  The disc is a hybrid containing three different audio formats--the first ordinary two-channel stereo, the second SACD two-channel stereo, and third SACD multichannel.  I played the disc in both stereo versions and found little to complain about, except that the overall sound field seemed a little murky at times and somewhat bass-shy, though very smooth throughout.

Email ThisBlogThis!Share to TwitterShare to FacebookShare to Pinterest
Labels: Franck