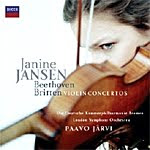 It's hard to go wrong with any recording of Beethoven's Violin Concerto, it's such a mainstay of the classical repertoire, especially when the recording has such an engaging performer as violinist Janine Jansen in it.  Ms. Jansen remains poised and virtuosic throughout the performance, adapting the piece confidently to her own unique approach.

The thing is, though, Ms. Jansen plays the Beethoven in so brisk yet so grand and Romantic a manner, with Fritz Kreisler cadenzas and all, that it's somewhat at odds with the more astringent style of the Deutsche Kammerphilarmonie Bremen who accompany her.  The orchestra and conductor, Paavo Jarvi, tend to be a little more austere and reserved.  Nevertheless, all the performers combine to create an up-tempo performance that gets the adrenaline racing, producing a good deal of excitement at the minor expense of some of the work's poetic elements.  In Ms. Jansen's hands, the work's best movement is the last, the Rondo, with Jansen making it more intensely playful than usual.

The coupling, Benjamin Britten's Violin Concerto from 1940, played with the London Symphony Orchestra, would not seem to have much in common with the Beethoven, but, in fact, the opening moments of both works use timpani in much the same way, and, if anything, the Britten is just as lyrical and perhaps even more passionate than the Beethoven.  Ms. Jansen plays up the alternating tensions of the piece quite well, representing as they do Britten's anguish over the Second World War, and she works up a demonic frenzy with the second movement Vivace marking.  All the same and despite her enthusiasm in the earlier segments, it is in the closing variations of the Passacaglia that Jansen really makes the work her own, leaving the listener on a heart-wrenchingly emotional high, the violin almost literally crying out in pain.

The 2009 Decca recordings appear to be throwbacks to the company's sound of a few decades earlier, whether it's in the Beethoven (recorded in Hamburg-Harburg) with the German orchestra or the Britten (recorded in London) with the British group.  Namely, the sound is slightly bright and close, with excellent clarity and dynamic impact, if lacking in natural warmth.  Although the sound is a tad hard and glossy (or perhaps because of it), it generates a fine illusion of depth.  Certainly, it does the timpani justice in both concertos.

Overall, in the Beethoven I continue to like the recordings of Perlman (EMI), Szeryng (Philips), Heifetz (RCA), Kremer (Teldec), Grumiaux (PentaTone), and Barton Pine (Cedille) over this new one by Jansen.  In the Britten, however, I'd have to say Ms. Jansen has few peers.