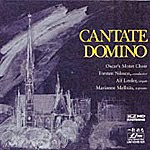 Audiophiles will undoubtedly have one version or another of this 1976 Proprius album sitting on their shelves.  The music is beautifully sung and beautifully recorded, and the disc has deserved its reputation through the years.  It's a collection of mostly sacred Christmas hymns, with a couple of traditional Christmas tunes thrown in for good measure (and sounding oddly out of place).  After sublime renditions of "Silent Night," "Hosianna Davids Son," "Christmas Song," and the like, the concluding "Zither Song" and "White Christmas" strike an odd note.  In fact, the performance of "White Christmas" with its jazzy organ accompaniment has always reminded me of a skating rink.

However, it's not the interpretations one talks about in a review of a new mastering of Cantate Domino.  It's all about the sound.  Producer Winston Ma says in the booklet note, "I know you have a Proprius copy, and most likely other versions as well.  I urge you to compare those recordings with this one; I think you will be pleased that you have the final and ultimate edition...."  Fair enough.  I did just that, placing the LIM and Proprius discs in separate CD players, adjusting the gain for identical outputs, and making the comparisons.  As always, though, straightforward comparisons don't always tell the full story because without a master tape in the room, one never knows for sure which version is closest to the original, only which version one likes best.

I seem to recall years ago being slightly disappointed with Proprius's CD transfer because it appeared to lose some bass compared to the LP.  Not so with LIM's K2HD remastering.  The bass is the most noticeable thing about the new disc.  If you want to make a comparison for yourself, try starting with "Maria Wiegenlied."  Behind the vocals it's got a big organ that sweeps over the listener like a wave.  Yet with the more prominent bass, the LIM reveals more low-end noise, too.  Oh, well....

The second most noticeable difference is in overall smoothness.  The LIM tends to sound slightly more natural, refining hard edges that seem a tad "digital" on the Proprius disc.  Yet with the increased smoothness, you lose the tiniest degree of perceived transparency, too.  I say "perceived" because, again, you don't know what the original master tape sounds like.  Likewise, the LIM transfer seems fuller in the mid and upper bass, making it sound bigger and mellower than the Proprius.  But which is right?

Winston would undoubtedly tell you that his K2HD remaster (engineered by Paul Stubblebine and Takeshi "Hakkaman" Hakamata) neither adds nor subtracts anything from the original tape, and we'd have to take his word for it.  Still, there is no way of telling for sure without actually hearing the LIM disc next to the original tape.  All I can say is that this new LIM remaster is a bit more pleasing to my ears than Proprius's own CD.  Whether the LIM is better than the Proprius CD I'll leave to the golden ears of other reviewers.  Frankly, after some thirty-five years of comparing LPs and CDs, the whole thing remains a mystery to me.