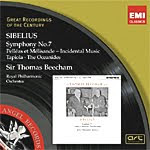 I'm willing to bet that if you listened to it, you couldn't tell this recording was well over a half a century old.  Recorded in 1955 (1955, imagine that!) the stereo sound comes up like new in this EMI "Great Performances of the Century" remastering.  Sure, in quiet passages you can hear a bit of background noise, but during most of the music it disappears to the ear, and you never notice it.  What you do hear is a solid, if not particularly deep, bass; a clear, natural midrange; some sparkling highs; and a fine sense of depth and spread to the orchestra.  Remarkable, considering that this is one of the earliest stereo recordings EMI ever released for the home.

Anyway, it's the music that counts, and this is one of those albums that has stood the test of time to become a legitimate classic.  Beecham came to Sibelius relatively late in his career, but once he found the music, he championed it evermore.  The composer himself was later to say that he considered Beecham one of only two conductors he preferred doing his work (the other being Koussevitzky).  These recordings explain why.

The disc lists the little Symphony No. 7 first on the album cover, and while it is quite fine, it's really the incidental music from Pelleas et Melisande that stands out.  One hears delicacy, refinement, nuance, sweetness, and light throughout the piece as Beecham lovingly caresses each phrase.  Following the eight movements of Pelleas (Beecham chose to leave out one movement) is the tone poem Oceanides, which the conductor frankly described as "that strange composition--very strange indeed."  Yet I found it far from strange, at least in Beecham's hands, a beautiful evocation of the sea.  After the little twenty-minute Seventh Symphony, things conclude with Sibelius's popular Tapiola, again among the best interpretations you'll find, delightfully, charmingly performed as only Beecham could manage it.

I might add in closing that if you own EMI's previous CD transfer, you might find this one slightly better balanced left to right, slightly fuller, and slightly smoother overall.  At mid price, it's surely a must-buy.