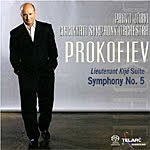 Maybe I'm just getting used to Maestro Paavo Jarvi. When I first heard his music making, he seemed a bit too buttoned-up for me, too conservative, too ordinary. But in the last few years, he seems to be loosening up and allowing himself more individual expression. Either that or I'm just adjusting to his style. I dunno. His Prokofiev album is one of the best things to date from him, and in particular one of the most invigorating performances of Lieutenant Kije I've heard.

Things begin, though, with Prokofiev's Symphony No. 5, a work the composer wrote while living in the U.S.S.R. in 1944. Although it was toward the end of World War II, the symphony is not a "War" piece as such. In fact, it is relatively lightweight, no Shostakovich here. It's so modest, lyrical, and accessible, in fact, that it was one of the few works of the time the Soviet government never condemned as dissonant or corrupt. Jarvi is rather leisurely in the first movement, but he warms up to the Scherzo and handles the slow Adagio with charm and sophistication. It may not be the absolute best reading of the Symphony available, but it's close enough.

However, it's the in the Lieutenant Kije Suite that Jarvi shines. The composer wrote it after returning to his homeland from Paris in the early 1930s. Kije is a comic satire, written for a movie and poking good-natured fun at a nineteenth-century Czar whom everyone is eager to please. Apparently, the music was populist enough that the Soviet censors could get behind it, and, indeed, it has lasted as one of Prokofiev's most endearing works. Jarvi makes the most of its colorful rhythms and jaunty escapades to keep one entertained for the duration. It may not have all the charm or easygoing smoothness of Previn's accounts, but it more than makes up for it in vitality. Yet don't expect the performance to be overly fast or nerve-wracking. It isn't. Some of it even seems a mite sluggish. Just don't despair; it's all a part of Jarvi's overall plan for the Suite, and, as I say, it works.

Telarc's sound works, too. They have issued the music on two separate discs, a straight stereo CD version and an SACD hybrid that contains the regular two-channel stereo version, an SACD stereo version, and an SACD multichannel version on different layers. Of course, you will need an SACD player to access the SACD layers, and for multichannel fanciers it may be worth it. Telarc sent me both discs, so I listened to and compared the regular and SACD stereo formats side by side in two players. I confess I could hear little difference, perhaps a shade more dynamic range and clarity from the SACD. But this is of small importance because they both sound good--excellent depth, excellent stage spread, excellent impact, excellent frequency extension, and excellent bass. Perhaps the midrange wants a little something in ultimate transparency, but that's about it. The sonics round out a fine set of interpretations.