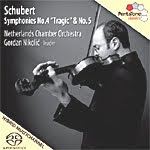 Did Franz Schubert (1797-1828) ever compose anything that wasn't totally engaging, most often delightful?  Yet in his lifetime he was forever in Beethoven's symphonic shadow, and while his chamber works were often in demand, hardly anyone performed his bigger-scale works.  Indeed, his crowning gem, the Symphony No. 9, didn't even get a performance until more than a decade after his death.

On this PentaTone disc we hear two of Schubert's most opposite symphonies, Nos. 4 and 5, with No. 4, which he called the "Tragic" symphony, all gloom and doom, and No. 5 among the most sprightly things he ever wrote.  They are sort of like Beethoven's Fifth and Sixth Symphonies in their opposing moods, even though in the hands of Gordan Nikolic and the Netherlands Chamber Orchestra, both of the Schubert pieces come off rather darkly.

Things begin with the Symphony No. 4, which Schubert described in part as "death, the grave, decomposition, judgement, and eternal rest."  Nikolic takes the composer at his word and produces a wholly dramatic statement of the work, the opening movement whipping up a storm of theatrical energy and everything following in close order.  Things are a little uncertain and off-kilter about the symphony, culminating in an ambiguous final movement that can't quite make up its mind if it wants to be exciting or somber.  Maybe it's excitingly somber.

The concern I have with Nikolic's interpretation of the Symphony No. 5 is that it should be, in contrast to No. 4, all bubbly and effervescent but isn't.  It's almost as slow and earnest as the Fourth.  Nikolic takes a very formal and serious approach to the music as compared with conductors like Beecham (EMI), Klemperer (EMI), Goodman (Nimbus), and Abbado (DG), who are far more lighthearted.  Maybe Nikolic wants us to see the more-staid connections between Nos. 4 and 5, but the connections seem nebulous to me.  With Nikolic, the opening movement of the Fifth seems too slow, overly relaxed, even slack; the Andante works better, liquid and sweet; the Minuetto oddly slows down again and could have had more bounce; and the final movement Allegro vivace, while livening up the proceedings a bit, remains pretty heavy.

No reservations about PentaTone's 2008 recorded sound, though.  It's mostly smooth and solid, the chamber orchestra sounding intimate, yet weighty when necessary.  The sonics are balanced slightly on the dusky side, not exactly thick but not quite as transparent as I'd like.  There's a strong lower-midrange response for foundation, if not much in the way of deep bass.  Overall, in regular stereo the sound is fairly clear and warmly realistic.   In SACD stereo it seems marginally brighter and more dynamic, but not by much.

If the coupling here suits you, the disc works.  Personally, I'd rather listen to any of the conductors I mentioned earlier in the Symphony No. 5, although Nikolic and his players are fine in No. 4.  Of course, if you're looking for multichannel sound, this hybrid SACD (or SA-CD as PentaTone are now calling the process) may be just right for you.