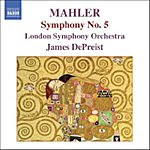 A friend of mine was commenting recently on how the cost of the formerly budget-priced Naxos releases has inched to within a few dollars of what we normally regard as the mid-price range.  It's true; as of this writing Naxos discs were selling at a list price of $8.99, which means their competition is a lot tougher.

In fairness, Naxos have been attracting some big names of late.  This Mahler disc, for example, boasts one of America's finest conductors, James DePreist, and one of the world's finest orchestras, the London Symphony.  Still, while it's a good performance and a good recording, you have to consider that for just a few dollars more, $11.98, you can buy an acknowledged classic like Sir John Barbirolli's 1970 account from EMI in their "Great Recordings of the Century" series.  It makes you stop and think for a moment.

Anyway, DePreist's recording is a decent alternative at any price.  Given that Mahler symphonies, and especially the Fifth, provide enough varied material--from grave and gloomy to joyful and triumphant, from lush and lovely to grand and imposing--for any conductor to make his mark, it's a wonder there is any consensus at all about who might be "best."

DePreist takes a kind of middle-of-the-road approach.  The performance does not carry the weight of a Solti, the exuberance of a Rattle, or the intense personal emotion of a Barbirolli, but it does have a little of each of these elements.  The Scherzo, which is at the heart of this big, purely orchestral work, is appropriately zippy and happy after the relatively dark (albeit sometimes resounding) opening movement, followed by the famous Adagietto (the composer's so-called love letter to his wife-to-be), taken slowly and comfortably.  After that, I'm not sure it was even necessary for Mahler to write a Finale, but it brings the work to a delicious close, although DePreist seems a little hesitant about it.

The Naxos sound is better than average (recorded in Abbey Road Studios in 2005), being highly dimensional and very dynamic.  Bass is impressive on occasion, and a few glistening highs ring out as well.  The midrange, however, is not as transparent as on Barbirolli's older recording, another reason for giving the EMI disc a second thought.