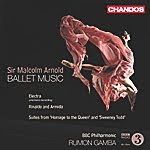 Although many of us think of Sir Malcolm Arnold (1921-2006) as a composer of orchestral music--symphonies, concertos, overtures, and the like--this album reminds us that he composed a few ballets as well.  It's mostly brief stuff we get here, and perhaps it doesn't amount to much, but it's good to have it collected together in chronological order and performed so well.

The first piece in the set is a twenty-minute suite from Homage to the Queen, Arnold's first ballet, composed in 1953 for the coronation of Queen Elizabeth II.  It begins in a typically bombastic Arnold manner, but it's followed by some delightful short movements that are light, airy, and lithe, as well as more typically flamboyant Arnold, concluding on a wholly regal tone.

Rinaldo and Armida is a dance-drama in one act from 1955.  The composer based the ballet on a sixteenth-century poem about a deadly enchantress meeting her doom.  Thus, it's spooky, melancholy, and histrionically dramatic by turns and is probably the best work in the set in terms of pure musicality.

Next, we get Arnold's 1959 score to the famous story of Sweeney Todd, the barber who kills his clients and chops them up into meat pies.  Like Sondheim's later music, Arnold's music contrasts the purely comical with the grotesque.  On this disc, we get a concert suite arranged by David Ellis in 1984 in consultation with the composer.  The tunes are varied and in some sections more than a touch weird, but they are always witty and entertaining.  In terms of pure enjoyment, Sweeney Todd is the most mainstream of the lot.

The disc concludes with Electra, 1963, in a première recording.  It's another short ballet in one act, about fifteen minutes.  Based loosely on the play by Sophocles, this is the darkest piece in the album and probably the least accessible, although the extensive percussion should keep most listeners awake.

Matching the ballet form, Ruman Gamba and the BBC Philharmonic are lyrical and sweet when necessary, light on their feet, yet seriously thrusting and forceful when the occasions demand.  Gamba keeps the music flowing at a theatrical pace, and the Chandos audio engineers do their magic with sound that is warmly atmospheric, yet clean and reasonably transparent.  The recording could have used a bit more deep bass, but, otherwise, it offers good orchestral depth and breadth, with some sounds extending well beyond the boundaries of the speakers.

Email ThisBlogThis!Share to TwitterShare to FacebookShare to Pinterest
Labels: Arnold.Malcolm