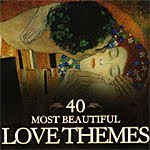 In the mid Fifties, when I was in fifth or sixth grade, I remember buying a LP box set of excerpts from famous classical masterpieces.  It was quite a revelation to me at the time because my parents didn't care much for classical music, and I had only heard classical pieces on the Big John and Sparky Saturday morning radio show and occasionally in Looney Tunes and Disney cartoons.  The set of excerpts was, therefore, something of an introduction to the classics for me, no matter how truncated the music.

That was a long time ago, but the same thing happens here with 40 Most Beautiful Love Themes.  On two discs, Warner Classics offer up forty excerpts of classical music representing some of the most romantic tunes ever written, things like Mozart's Piano Concerto No. 21, Tchaikovsky's Romeo and Juliet, Rachmaninov's Piano Concerto No. 2, Saint-Saens' "The Swan," Borodin's String Quartet No. 2, Wagner's Tristan und Isolde, Satie's Gymnopedes No. 1, Liszt's Liebestraum No. 3,  Massenet's "Meditation" from Thais, Ravel's Bolero, and so on.  You name the tune, it's here.  Of course, the pieces are not often in their entirety, between three and seven minutes each, often fading out just as they're getting started, but you'll get enough of the music to count.

The idea is for classical-music lovers to listen to it in the car, maybe, or as background music, and for nonclassical music listeners to learn a little more about the subject.  The music is well played by top-name artists, so there's nothing to fear in terms of mediocrity:  Kurt Masur, Lawrence Foster, Hugh Wolff, Andrew Davis, Zubin Mehta, Kent Nagano, Jean-Francois Paillard, Bernard Haitink, Christoph von Dohnanyi, Lorin Maazel, Eliahu Inbal, and many other first-rate conductors contribute.

Warners chose the material from their catalogues of Erato, Teldec, and Warner Classics, the recordings spanning the years 1964-2004.  Yes, there is some small variation in the sound characteristics, with none of it audiophile quality, yet it's all quite acceptable for casual listening.  It makes a pleasant diversion that doesn't require one's full attention.