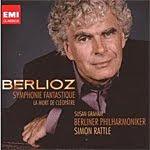 For the past few years I've been buying as many Japanese EMI-Toshiba classical remasters as I can find on-line because I think they sound better--clearer and more dynamic--than most of the English parent company's releases. I mention this because even though Simon Rattle's new disc of Berlioz's Symphonie fantastique is thankfully not done live, it still doesn't have the clarity of many of the old Klemperer, Beecham, and Previn recordings of the late Fifties, Sixties, and Seventies.

I have the feeling that ever since the introduction of digital recording some three decades ago, record companies have been going out of their way not to produce a hard, metallic, so-called "digital" sound. The trouble is, they sometimes go to the extreme and produce soft, mushy affairs. This one with the Berlin Philharmonic is not at all soft or mushy, but it does not particularly impress one with the transparency of its sound, either. It simply displays ordinary, somewhat undistinguished audio. Which is something of a shame in the case of the Symphonie fantastique because it's a work that can provide a lot of sonic wow in its final two movements. Here, the sonics come off as rather commonplace.

Nor does maestro Rattle's interpretation do much to set the adrenaline flowing. His performance is a fairly straightforward affair, with nothing really coming to life: Not the "Reveries," which lack romantic fervor; not "The Ball," which is rather cool; not "The Scene in the Country," which is too relaxed; not the "March to the Scaffold," which is just plain mundane; not even the "Witches' Sabbath," which you'd think would be hard to hold down, but Rattle manages it.

No, I'd say if you want a no-nonsense performance, you'd do best to stick with Colin Davis Concertgebouw Orchestra recording (Philips). Or maybe Thomas Beecham's more flamboyant realization (EMI) or Leonard Bernstein's more demonic one (also EMI). They tend to make Rattle's reading sound like just that: a simple "reading" that never catches fire.

Well, at least the coupling comes off a little better, but it's hardly worth buying the whole album for it.