Plus, Dance of the Seven Veils and the Rosenkavalier Suite. Lorin Maazel, New York Philharmonic. DG B0007890-02. 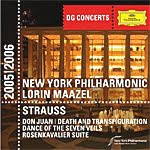 Apparently, Deutsche Grammophon saw the writing on the wall several years ago. This disc was among the first of their downloadable concert series. The idea is that throughout the year, DG makes available on-line recordings of select live concerts for listeners to buy and download.  You can find their downloads at the following location:
http://www2.deutschegrammophon.com/webseries/?ID=dg-concerts
Then listeners can, presumably, listen to the music on their little plastic computer speakers or burn it to a CD or DVD and listen to it on a proper hi-fi system. The company also makes a few of these concerts, like the one under discussion here, available for sale via disc.
DG recorded this program of Richard Strauss material between March and October of 2005 at Avery Fisher Hall at Lincoln Center, New York. The NY Philharmonic's Music Director at the time, Lorin Maazel, conducts with his usual competent style and enthusiasm, if not with the greatest degree of subtlety. The performances are capable, to be sure, but nothing actually grips one enough to want to listen to much of it again.
Don Juan (1889), one of the composer's earliest tone poems, is appropriately energetic in its first half, more contemplative in the middle, and acceptably dramatic at the close. Death and Transfiguration (1889) is more serious, of course, so Maazel becomes more grave and subdued. Unfortunately, audience noise intrudes upon the quieter moments, sometimes to the point of annoyance. I might add that we also get to hear applause at the end of each selection, for me the equivalent of a commercial interrupting a movie. Maazel takes the "Dance of the Seven Veils" from Salome (1905) more frenetically than sensually, but it makes for an exciting and arresting interpretation. Finally, in the Rosenkavalier Suite the conductor seems more at home than anywhere else, bringing a sweet charm to the waltzes.
As I say, DG recorded the sound live, and it is rather forward and bright, without a lot of mid-bass warmth or deep bass. The tonal balance places the listener fairly close to the orchestra. While the highs are excellent, there is a touch of harshness to the upper mids. The best thing about the sound is the stage depth, which comes across quite well, very realistically, very lively. Accompanying the disc we find extensive booklet commentaries, most of them coming from the concerts' original program notes.
JJP
Posted by John J. Puccio