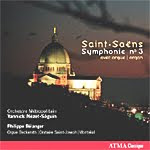 The prolific composer Camille Saint-Saens (1835-1921) once said of himself that he was "like a tree producing leaves." At the time the Philharmonic Society commissioned him to write the Symphony No. 3, the so-called "Organ" Symphony, audiences already recognized him as the greatest living French composer. Today, we know him chiefly for his opera Samson et Dalila, the orchestral Carnival of the Animals, the Second Piano Concerto, the little Dance macabre, and, of course, the Third Symphony, among many other things. It's a commendable output.

The Symphony No. 3 is a colorful, at times bombastic, but thoroughly enjoyable piece of music, with the organ taking a commanding part in the Adagio and the second segment of the Finale. Yannick Nezet-Seguin, Montreal's Orchestre Metropolitain, and organist Philippe Belanger attack the music with gusto. But for me the test of any reading of the Third Symphony is the Adagio. The organ should wash over the listener in deep, gentle waves. The ATMA recording almost does just this thing, and certainly Belanger gives it his best shot.

By the time the fireworks begin in the final third of the piece, the players are well up to the challenge, and both the organ and the orchestra ring out authoritatively. It is perhaps a shame, actually, that one has to make comparisons, but it's inevitable. The two benchmarks that stand out for me are the performances by Charles Munch and the Boston Symphony Orchestra (RCA) and by Louis Fremaux and the City of Birmingham Symphony Orchestra (EMI), both of which provide an extra spark, an additional note of exhilaration, missing from Nezet-Sequin and his forces.

ATMA's sound, recorded in 2005, is remarkably smooth, with adequate inner detailing; yet for so robust an organ recording the midrange and high end seem a bit too thin and warm, lacking the last degree of richness and sparkle. Nevertheless, there is a fine hall ambience here that will not displease most listeners.

Filling out the album are the three pieces for organ listed above, all of them sounding a touch billowy but well performed, with some really strong bass for those who enjoy their subwoofers.