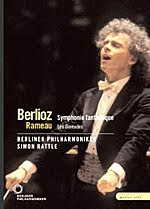 The DVD keep case notes that "this 1993 recording must be hailed as a document of supreme historical importance as it is the first audio-visual live recording of a concert given by Sir Simon Rattle and the Berliner Philharmoniker. Six years later the orchestra voted by a large majority to appoint Rattle its new principal conductor and artistic director in succession to Claudio Abbado." The hyperbole of "supreme historical importance" aside, it is a meaningful event, not only because we get to see Rattle leading the Berlin players but because he so fervently leads them in so diverse a program of French music.

Rattle chose for the event Rameau's ballet suite for Les Boreades, a purely Baroque composition for small-scale ensemble, and Berlioz's Symphonie fantastique, a thoroughly trailblazing Romantic work for a decidedly large-scale orchestra. It's a wonderful juxtaposition of musical extremes, Rattle leading both of them with almost youthful zeal.

The concert begins with the music of Jean-Philippe Rameau (1683-1764), and Rattle using a trimmed-down Berlin Philharmonic. He does up the suite's twelve movements with energy and élan, the video portion of the disc pointing up Rattle's apparent delight in the undertaking as he practically grins from ear to ear while conducting the piece.

Then we get the Symphonie fantastique, written by Hector Berlioz (1803-1869) when the composer was only in his mid twenties and pining (in the music and in real life) for a lost love. The piece paved the way for more innovations in musical themes and orchestrations, and Rattle seems to take pleasure in making sure we know about it. Unlike the conductor's more-recent Berlin Philharmonic treatment of the work on an EMI compact disc, this earlier performance (some fifteen years earlier) shows far more animation, color, and character. Maybe Rattle is slowing down with age, becoming more cautious; I don't know. In any case, here he appears to put more energy into the proceedings.

In the "Reveries" Rattle is passionate; in the waltz at "A Ball" he produces a charming lilt; and in the "Scene in the Country" he introduces an ironically bucolic atmosphere. Then we come to the two most-famous movements, "The March to the Scaffold" and "The Dream of a Sabbath Night" (or Witches' Sabbath), both of which Rattle treats more with grace and style than with outright mischief or fury, but then he lets loose in the closing minutes. This is basically a forthright rather than wholly exhilarating interpretation, the conductor allowing the composer do most of the work, which for Berlioz works out just fine.

In terms of the disc's video presentation, it comes in a basic, Nineties television-broadcast 1.33:1 aspect ratio, the picture a tad soft and fuzzy, even by standard-definition yardsticks. The most refreshing thing about the video is being able to see the look in Rattle's eyes and the expression on his face as he conducts, something a conventional audio-only CD obviously doesn't permit one to do.

Insofar as the audio is concerned, the DVD comes with three formats: PCM stereo, Dolby Digital 5.1, and DTS 5.1. As with other comparisons I've made of classical-music DVDs using these formats, the PCM stereo sounds the smoothest and warmest of the three but the least clear; the Dolby Digital 5.1 adds more ambient bloom in the surround speakers; and the DTS 5.1 seems the most dynamic and transparent, albeit at the expense of being slightly brighter. I listened (and watched) first in my home-theater room using a 7.1 speaker setup and then in my living room using two speakers. I switched around a good deal among the three audio formats and found that none of them matched the sound on a well-recorded, well-transferred CD. All three of the DVD's audio formats appeared veiled and dull by comparison. And, of course, there is the audience noise to contend with, which is, in any case, a part of what makes the audio-video experience appealing to a lot of folks.

The entire concert lasts about an hour and a half, the disc includes a menu and chapter index, and the keep case comes with a handy informational booklet insert.