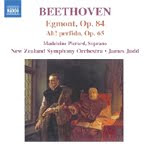 When Vienna's Royal Imperial Court Theater decided to stage poet and philosopher Johann Wolfgang von Goethe's play Egmont in 1810 (thirty years after Goethe wrote it), they asked Beethoven to write the incidental music for it. Today, we don't see much of the play or the full score of the music, although the Overture has a remained a staple of the classical repertoire.

Admittedly, a little of this complete incidental music (beyond the famous Overture) on Naxos goes a long way, and some of it even becomes a tad tedious without the accompanying stage action, especially toward the middle of the work. Still, there is much in Beethoven's music to enjoy, and it is always good to have so economical a recordings as this new budget Naxos release of the complete score, recorded so well.

The play itself is rather melodramatic, and conductor James Judd and his New Zealand Symphony play it up not only for maximum dramatic effect but for it subtlety as well. In other words, you'll find the opening Overture and the closing "Victory Symphony" quite exciting and the quieter interludes in between equally charming, if, as I say, sometimes a bit redundant.

For quite a while, my own favorite recording of the music has been that of George Szell and the Vienna Philharmonic, made by Decca in the late Sixties, issued by them on CD in the Eighties in highlights form, and reissued complete on CD in the Nineties. I have to admit that by comparison Szell and the VPO are more highly charged than Judd and his New Zealanders, but Judd comes close, and many listeners will prefer him at the price.

Soloist Madeleine Pierrard has a lovely singing voice in her several numbers; Claus Obalski is in fine, mellifluous voice for his brief narration; and the New Zealand Symphony perform in their usual highly disciplined manner.

Filling out the program are two of Beethoven's little Marches, WoO 18 and 19, which he called his "music for horses"; and the Scena and Aria "Ah! perfido," Op. 65, in which Ms. Pierrard again sings most sweetly.

As far as Naxos's sound is concerned, it is fairly dynamic, with a modestly wide stereo spread, although it is also slightly soft and warm and displays little orchestral depth. Nevertheless, the acoustic is flattering, and the smooth, realistic concert-hall sound is entirely listenable. This is certainly an attractive album and well worth investigating.