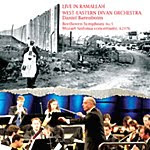 This live concert album is subtitled "Barenboim's orchestra plays for peace in Ramallah." For good reason, as his youth orchestra, which he co-founded with Palestinian Edward Said in 1998, is made up of young players from both Israel and Arab countries, all working together to unite people in the joy of music. If this concert is any indication, they're on the right track.

Things begin with Mozart's Sinfonia Concertante in E flat major for oboe, clarinet, bassoon and horn, K297b. It's a peppy little work, yet under Barenboim's baton, it displays much inner warmth, serenity, and wit as well.

Then comes the centerpiece of the show, Beethoven's Symphony No. 5, possibly the most well-known piece of classical music in the repertoire, which the conductor plays with fire and enthusiasm. You'll find everything here you've come to expect from the Fifth Symphony and more, Barenboim pointing up the work's tense explosiveness and doing so at speeds that approach those of Fritz Reiner in his old RCA Chicago Symphony account. OK, maybe the performance lacks the ultimate electric charge of Reiner's performance or of Carlo Kleiber's DG recording, but it does come close with its involvement, its fury, its energy, and its passion. And to think that it is a youth orchestra performing at this high level and with this precision is quite remarkable.

Following the Beethoven, Barenboim gives us a brief, four-minute speech about his orchestra and how proud he is of them, saying he hopes the example of their willingness and cooperation will be an inspiration for understanding amongst all peoples. Then he concludes the program with an encore, the "Nimrod" segment of Elgar's Enigma Variations. It is quite beautiful and makes a fitting close to the concert.

The recording, made in Ramallah's Cultural Palace in 2005, is about what we have come to expect from miking a live event; namely, the sound exhibits a slightly veiled presence, with good dynamics but not a lot of essential clarity or orchestral depth. While the stereo image is admirably wide, the sonics are also rather close up, yet without a lot of sparkle. So, we get good performances here in somewhat indifferent sound.