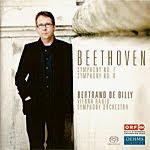 Maestro Bertrand de Billy's new performances of Beethoven's Seventh and Eighth Symphonies pretty much follow modern standards, meaning he adheres to the composer's tempo markings and includes all the repeats. For traditionalists like myself, this means the works lose a little of their old-fashioned charm, but there is no doubt they are exhilarating.

Fortunately, de Billy never overreaches himself trying to breathe too much new life into these warhorses. The first movement of the Seventh, for instance, moves at moderately quick speeds, yet it never loses the spirit of the dance rhythms. He especially plays up the dynamic contrasts for maximum impact, yet, again, he never forces them down our throats. In other words, while de Billy observes the Vivace elements of the opening section, he never lets the music become hectic or frantic, maintaining a steady, deliberate pace that fully suits the music.

The second movement Allegro moves at a faster and more constant speed than one usually hears, which emphasizes the staccato beat, combined again with wide dynamics makes it quite dramatic. The third movement Scherzo follows suit, the driving, energetic rhythms more naturally following the preceding two movements than most conductors care to provide.

De Billy takes no breaks between the first and second and third and fourth movements, further pointing up the continuity of pulse and cadence established earlier, ultimately producing a bouncy yet seriously affective mood.

The little Eighth Symphony has never enjoyed the popularity of Beethoven's more famous symphonies like the Third, Fifth, Sixth, Seventh, and Ninth, probably because one finds it rather buried in the middle of the rest and outclassed by them. It's something of a breather between the dashing Seventh and the monumental Ninth. Beethoven himself appeared to like his Eighth a lot more than his audiences did.

Anyway, de Billy strikes forth boldly in Beethoven's opening Allegro Vivace, giving it enormous power and conviction, which he maintains throughout the work. It makes us see the music as anything but slight or frivolous, as people sometimes characterize it. That said, however, my own orthodox tastes are such that I wished he had been a little more flexible and actually lightened the tone a bit.

Insofar as the sound goes, the engineers at OehmsClassics give us a beautifully balanced SACD, which the listener can play either in two-channel stereo as I did or in multichannel if you have the appropriate hi-fi gear. In stereo the sound nicely complements the performances, big and dynamic. Recorded in 2008-09, the sonics are at once smooth and mellow yet fairly well detailed and natural.  Orchestral depth is moderate, transient response is impressive, and the studio's ambient bloom is pleasantly unforced.

Finally, I should add that there are extensive booklet notes on both symphonies by Michael Lewin, who provides more insight and information than we normally find.