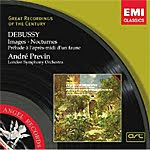 You'll want to buy, borrow, or hear this reissued album if for no other reason than to enjoy Previn's reading of Debussy's Prelude a l'apres-midi d'un faune. It's one of the most sensuous, sinuous, intoxicating versions on record, and it leads off this all-Debussy album. You'll find it at once an impressionistic aural fantasy and a literal sound picture, music filled with as much feeling as description.

Next up are the Images for Orchestra--crystalline, sparkling, every facet a shining gem. But here's the funny part: It was the first time that EMI had recorded digitally, and according to the conductor, "the Japanese gentleman running the machines said to me that it would be very difficult, and costly, to make intercuts. ...And we went out and played 'Gigues,' and then all the other pieces, in one--and that's what you hear on the record."

Finally, we get the three Nocturnes, three more short impressionistic tone poems, which began life as "Three Twilight Scenes" but turned into a study of the color grey, a noisy public festival, and a song of the ocean and mermaids. Lovely works and lovingly interpreted.

EMI originally made the recordings in 1979 and 1983 and repackaged them in 2007 in their "Great Recordings of the Century" series. They appear to be the same as the company released earlier in several other LP and CD issues. There is no mention on the back of the case or in the booklet insert about using Abbey Road Technology to reprocess the sound. I suppose the idea is that the digital recordings were good enough to begin with, and no further fiddling with them was necessary. Certainly, the music still sounds splendid--nuanced yet dynamic, delicate yet robust, and well detailed all the way around.

I know there are other fine recordings of these Debussy works on disc, from the likes of Haitink (Philips), Martinon (EMI), Argenta (Decca), Simon (Cala), and others. But it's hard to find such a good combination of performance and sound as you'll find here in this Previn re-release.