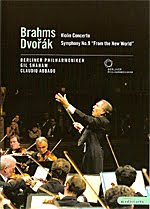 Here is a classical-music DVD worthy of one's attention. It features a world-class orchestra and conductor performing a program over 100 minutes long. It may not contain the greatest interpretations of any of the music, but it's more than satisfying in its playing and sound.

Claudio Abbado and the Berlin Philharmonic recorded the concert live on May 1, 2002, in Palermo's newly restored Teatro Massimo, one of Europe's finest halls. As always, a classical-music DVD is mainly for people who enjoy watching an orchestra perform as much as they enjoy listening to the music, and it is not particularly for audiophiles who want to hear the absolute best fidelity from their sound system. As such, this Medici Arts disc provides a fascinating glimpse into the conducting style of Maestro Abbado as well as a look inside the glorious Teatro Massimo. But, fortunately, the music is not bad, either.

The concert begins with Beethoven's Egmont Overture, which Abbado does up in properly brawny, heroic style. Next is Brahms's Violin Concerto in D major, Op. 77, with violinist Gil Shaham. The soloist, conductor, and orchestra treat the work with a sweet spirit, light and lyrical, providing a nice bounce in the Allegro finale. Then we come to Dvorak's big gun, the Symphony No. 9, "From the New World," thrustful, rhapsodic, melancholy, jaunty, and exhilarating by turns, with Abbado and company in complete command. Finally, in a nod to the Sicilian setting, the program ends with Verdi's I vespri siciliani, where, interestingly, the bass finally makes its presence known.

Abbado provides the kind of thoughtful, refined, yet red-blooded, exciting, and invigorating interpretations for which audiences have always known him, his soloist is affecting, and his orchestra is as rigorously precise and rich-sounding as ever. These are first-rate if not quite absolute top-drawer performances.

The video is in a 1.78:1 widescreen format, so if you have a widescreen TV, it will fill every square inch of it. The picture looks very slightly faded and soft, as we might expect from a standard-definition television broadcast.

The audio comes in three formats: PCM stereo, Dolby Digital 5.1, and DTS 5.1. In surround, to which I listened (and watched) initially in my home-theater room, the DTS sounded marginally more dynamic and more open than the others, although a bit brighter, too. On the other hand, the Dolby Digital appeared smoother and less congested at the high end. In regular stereo in my separate living-room system, I preferred the straight PCM 2.0 track, which seemed more effortless under these conditions. Still, I would have preferred something more in the way of sparkle, transparency, and orchestral depth from all three formats. Which format you choose, I'd say, is purely a matter of personal preference for your own listening needs.

Also on the disc you'll find a main menu containing chapter selections; the bonus of a twenty-minute look at the city of Palermo, "A Portrait of Palermo," with an emphasis on its cultural life (narrated in German but available with English, German, French, Spanish, and Italian subtitles); and several trailers for other classical-music DVDs. In addition, the keep case includes a booklet of notes on the music and the musicians.